In early 2005, Konstantin Chaykin completed work on his second tourbillon table clock (Tourbillon Carriage Clock) and contemplated a more sophisticated project where the basic movement of the tourbillon table clock would be equipped with a fusée-and-chain transmission and a perpetual calendar with a four-digit year indication and 48-month programming disc cam. However, the idea of creating an Orthodox Easter computus, which came out of nowhere and instantly captured Konstantin’s imagination, distracted him from the project he had originally planned. Having done some historical research, he found out that not a single horologist had completed the task of realizing that function. Though a more complicated version of a computus, based on the Gregorian calendar, had seen several implementations, the question concerning a mechanical computus for the Julian calendar remained open. Without any regret, Chaykin abandoned the fusée project. Compared to exploring the newly discovered terra incognita, it seemed somewhat dull, so Konstantin delved into studying the peculiarities of the Eastern Orthodox Church liturgical calendar: “On one Orthodox website, I saw a table with the 19- and 28-year cycles of the Julian calendar. I started devising my own calculation method based on that table, which resulted in a unique algorithm that I kept as simple as possible. In my first computus clock, the Orthodox Easter date is calculated with the help of two discs, one with 19 teeth and the other with 28, with the same number of programming apertures located along each radius. When the programming apertures in the two discs align, the corresponding date becomes the date of Easter by the Julian calendar—one of 35 possible dates from March 22 to April 25 as per the Old Style.” Konstantin emphasises the straightforwardness of his design: “What makes this structure great is its elegance. The computus with a hand pointer is easily readable and can be implemented in any size—the date of Easter is clearly visible. The downside here is the energy required to make it all work, plus the need to design, finish, decorate, assemble, and adjust three hundred components. The movement of the first computus clock had to switch two levers once a year, which meant just a few components were required given the two additional programming discs.” Today’s beliefs in haute horlogerie suggest that the simplicity of the structure should be regarded as a weakness; however, from a technical, engineering point of view, the simplicity of Chaykin’s first computus clock was its main advantage. Looking at Konstantin’s first computus clock in terms of the difficulty of the algorithm, the solution has to be regarded as brilliant. He filed the application in June 2005 and obtained patent RU2306618 in January 2007 Patent RU2306618 became the first in Chaykin’s series of patents that as of the end of 2020 numbered 85, along with 62 officially registered descriptions of utility models. It should be noted that from the very beginning of his career as an independent horologist, he has decided to focus on embodying his own inventions rather than reproducing and reinterpreting inventions and designs of famous horologists of the past. 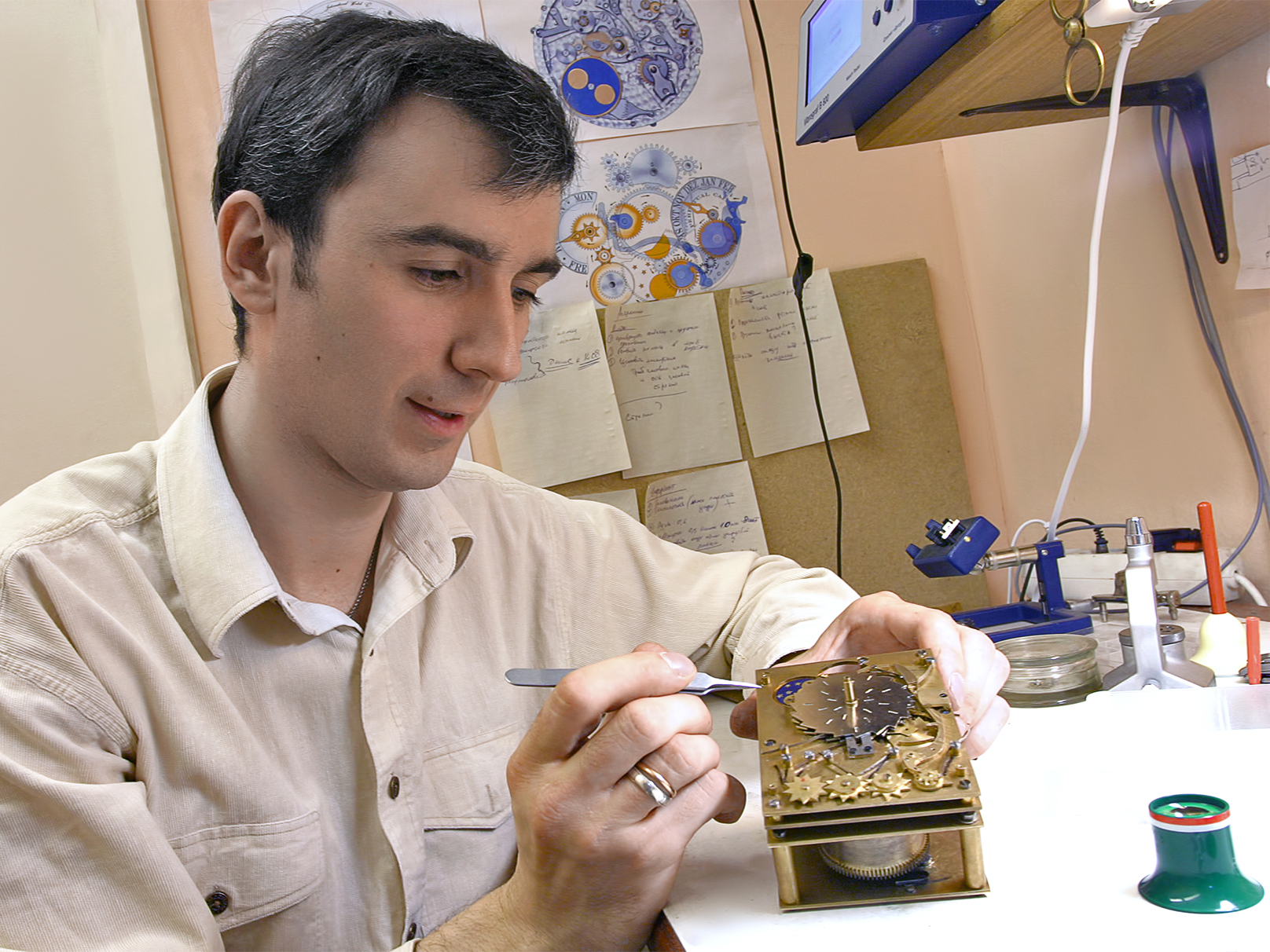 The Easter of Christ Computus Clock inherited the base tourbillon movement (the third tourbillon created by Chaykin) and the perpetual calendar from the aborted fusée project, which happened to be very useful as part of a computus clock. The size of the tourbillon movement, already made by that time, predefined the dimensions of the computus’ programming discs, which led to an indication issue—the working area of the indicator, which could not cover more than half of the dial diameter, had to accommodate the 35 apertures of the programming discs: “My first thought was it could be a good idea to use a moving ocular, but then I realised it would be inconvenient as the owner would have to find a particular point of view and look at the clock dial at a specific angle to discern something. Of course, I could have created a larger clock or used a backlight, but in the end I decided to install a cylindrical lens,” Chaykin reminisces. The clock was finished and presented to the Russian public at the Moscow Watch Salon in 2005 and then placed in the museum collection of the Konstantin Chaykin manufacture. 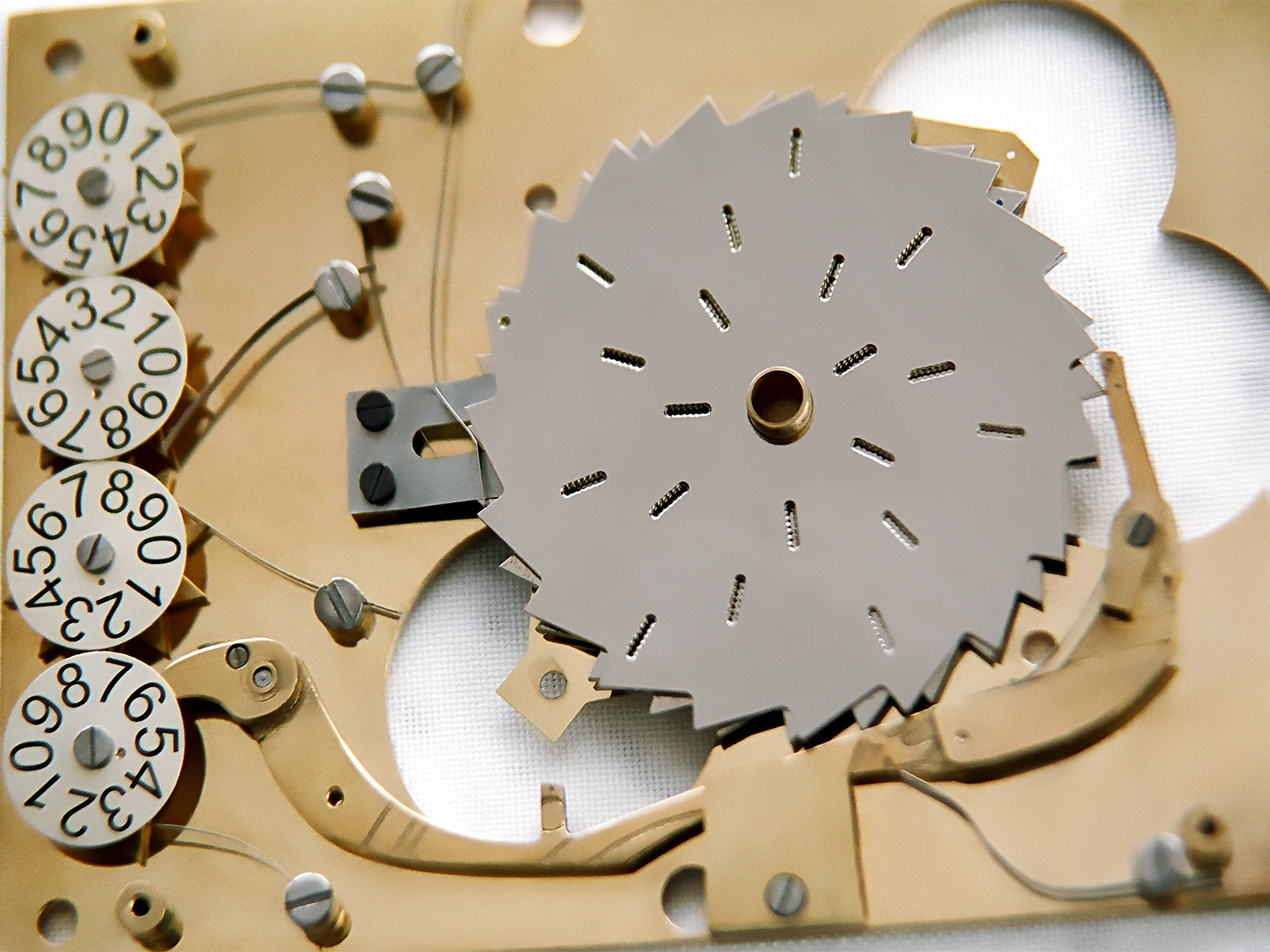 The complications of the Easter of Christ Computus Clock