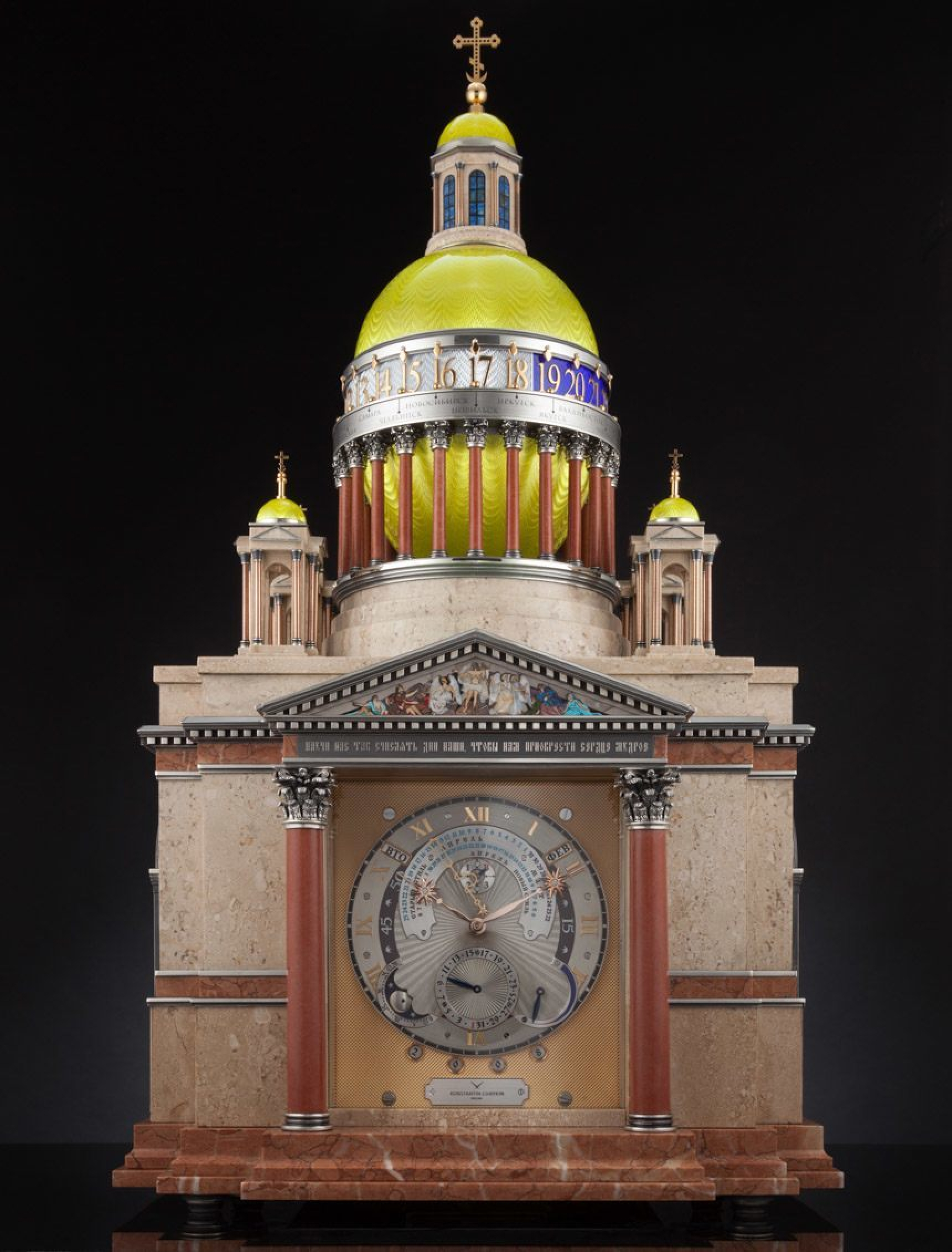 The finish of the “Northern Computus Clock” is rich and varied, just like the architectural gem which inspired it. In the décor of the clock, marble is the main feature, the famous red granite colonnade of St. Isaac’s Cathedral is reproduced in jasper, the sculptural capitals are made of silver, as are the portico roofs and the dome, which have guilloche and a translucent green and bright yellow enamel coating. The sides of the clock case are decorated with panels made using the Florentine mosaic technique, on which the stained-glass image of the risen Christ and the mosaic image of the Archangel Michael, from the main altar of the church, are reproduced.

The original bas-reliefs of the pediments of the north portico (“The Resurrection of Christ”), and the south portico (“Adoration of the Magi”), are reproduced on the pediments of the front and back of the case using the Florentine mosaic technique, the same technique being used in the side panels, on which the stained-glass image of the risen Christ and the mosaic image of the Archangel Michael, from the main altar of St. Isaac’s Cathedral, are reproduced. 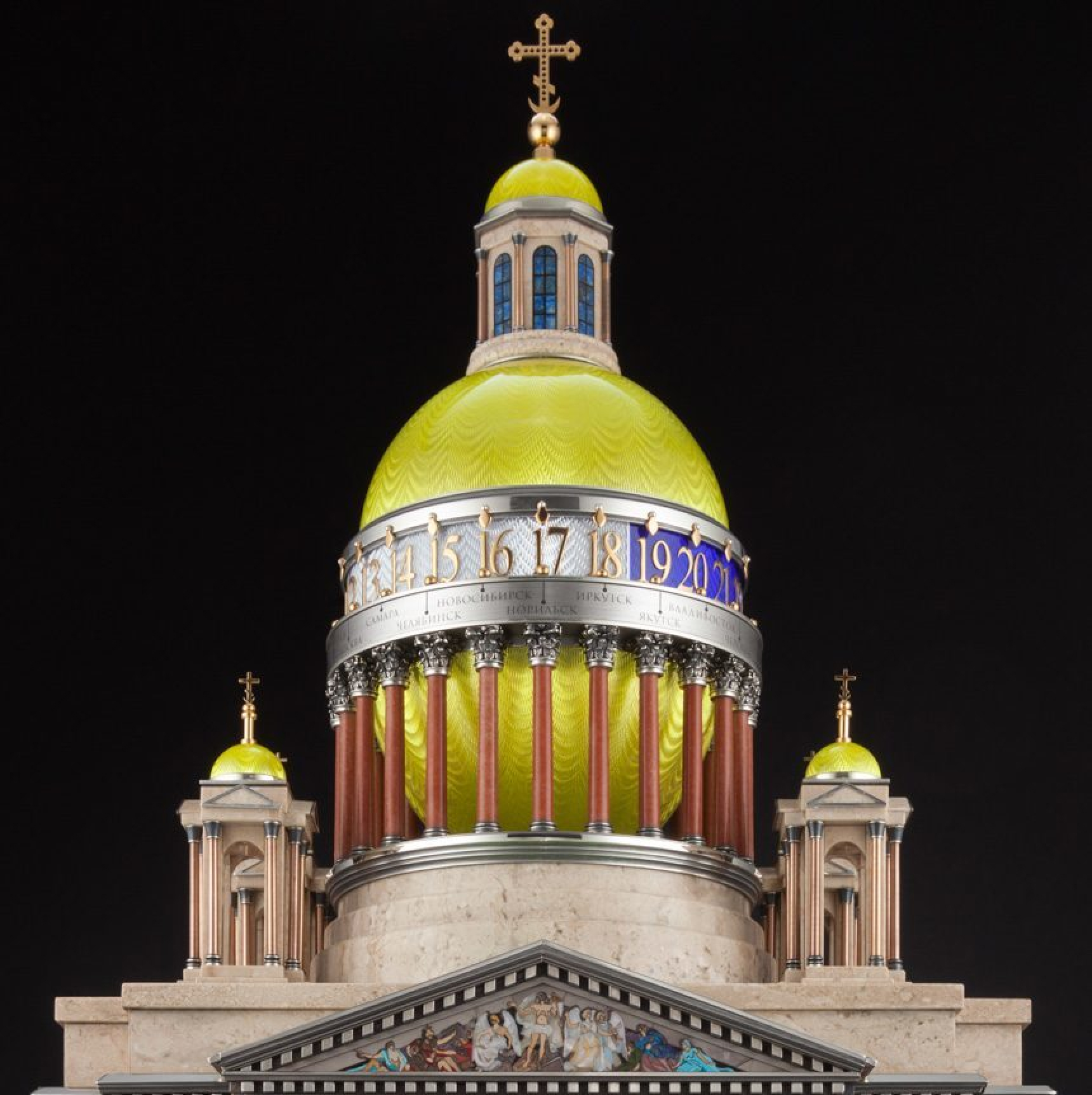 The cupula of St. Isaac’s Cathedral, one of the most grandiose constructions in the world, is covered in sheets of gilded copper. For the “Northern Computus Clock”, Konstantin Chaykin came up with a special interpretation of this architectural detail, envisaging the main dome as an Easter egg, decorated in a guilloche relief pattern and covered with gold-coloured hot enamel. Konstantin Chaykin wanted the clock to express the idea and symbolism of the Easter festival, hence why the dome is made in the form of an Easter egg, precisely this being interpreted as the symbol of the Resurrection in Orthodox tradition, with the giving of painted eggs at Easter an ancient tradition that is still followed to this day.

Reproduced in miniature, the colonnade of St. Isaac’s Cathedral, framing the dome of the “Northern Computus Clock”, by chance has exactly 24 columns, which is why Konstantin Chaykin chose it as the basis for the circular indications of the world and all-Russia times, the latter displaying the time in each of Russia’s eleven time zones.

The main dial of the clock features a scale indicating the date of the Orthodox Easter in the current year. At the same time, it is possible to calculate the Easter date according to both the old- and new-style calendars. The switching of the display to the new date occurs once a year, namely on the night of 31st December to 1st January. On the back of the movement there is a planisphere with a map of the night sky as seen from St. Petersburg, as well as indications for the season, sidereal time, and the equation of time , the latter being used to indicate the difference between true solar time and average solar time which arises due to the Earth’s elliptical orbit and the inclination of its rotational axis of 23 degrees. 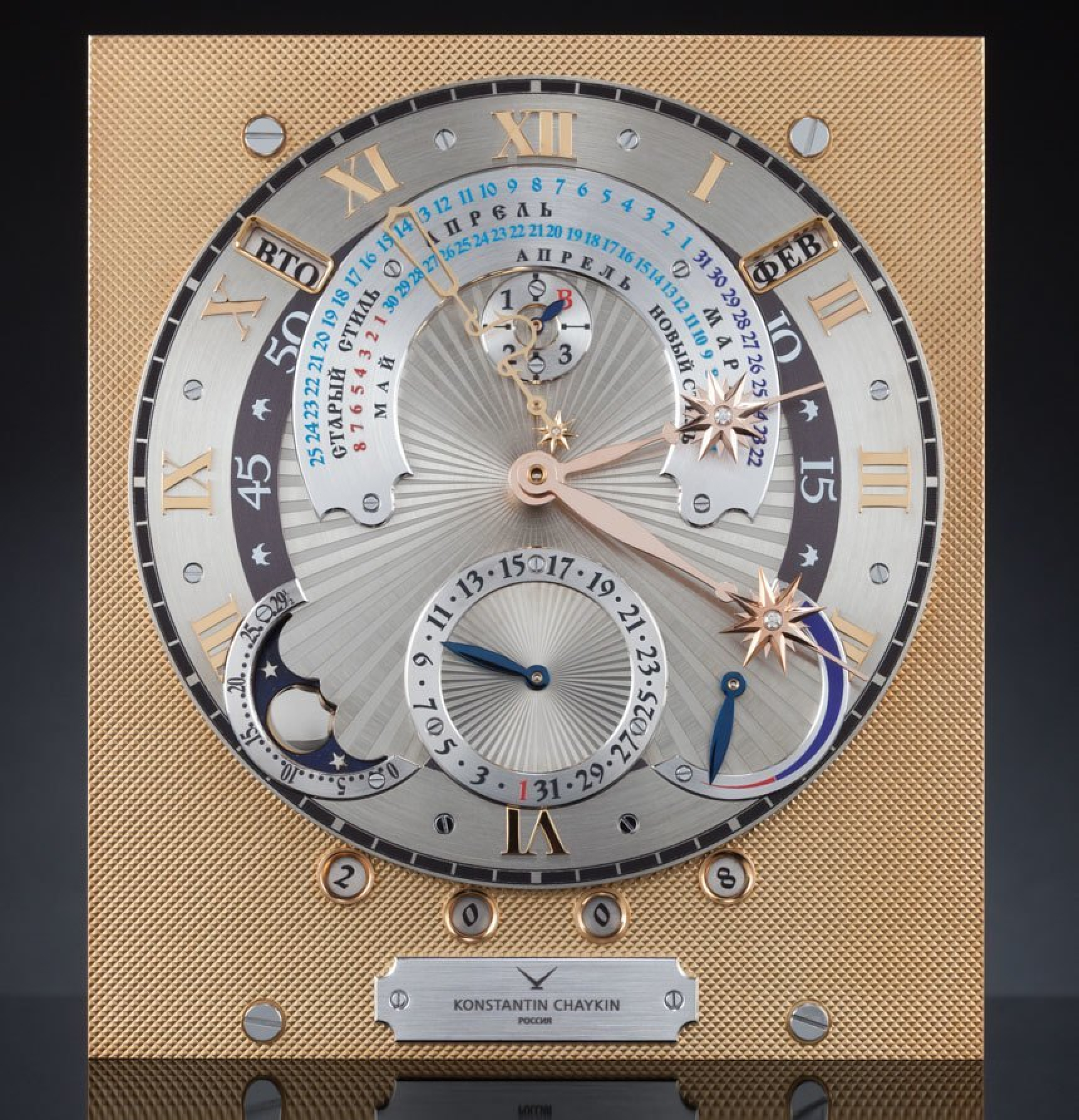 The movement of the “Northern Computus Clock”, in which 16 clock complications and functions are implemented, is made of 1375 parts, which is why, at the time of its completion, it was recognized as the most complicated clock movement ever made in Russia. In complexity, it was only surpassed by Konstantin Chaykin’s next supercomplicated masterpiece – the “Moscow Computus Clock”. 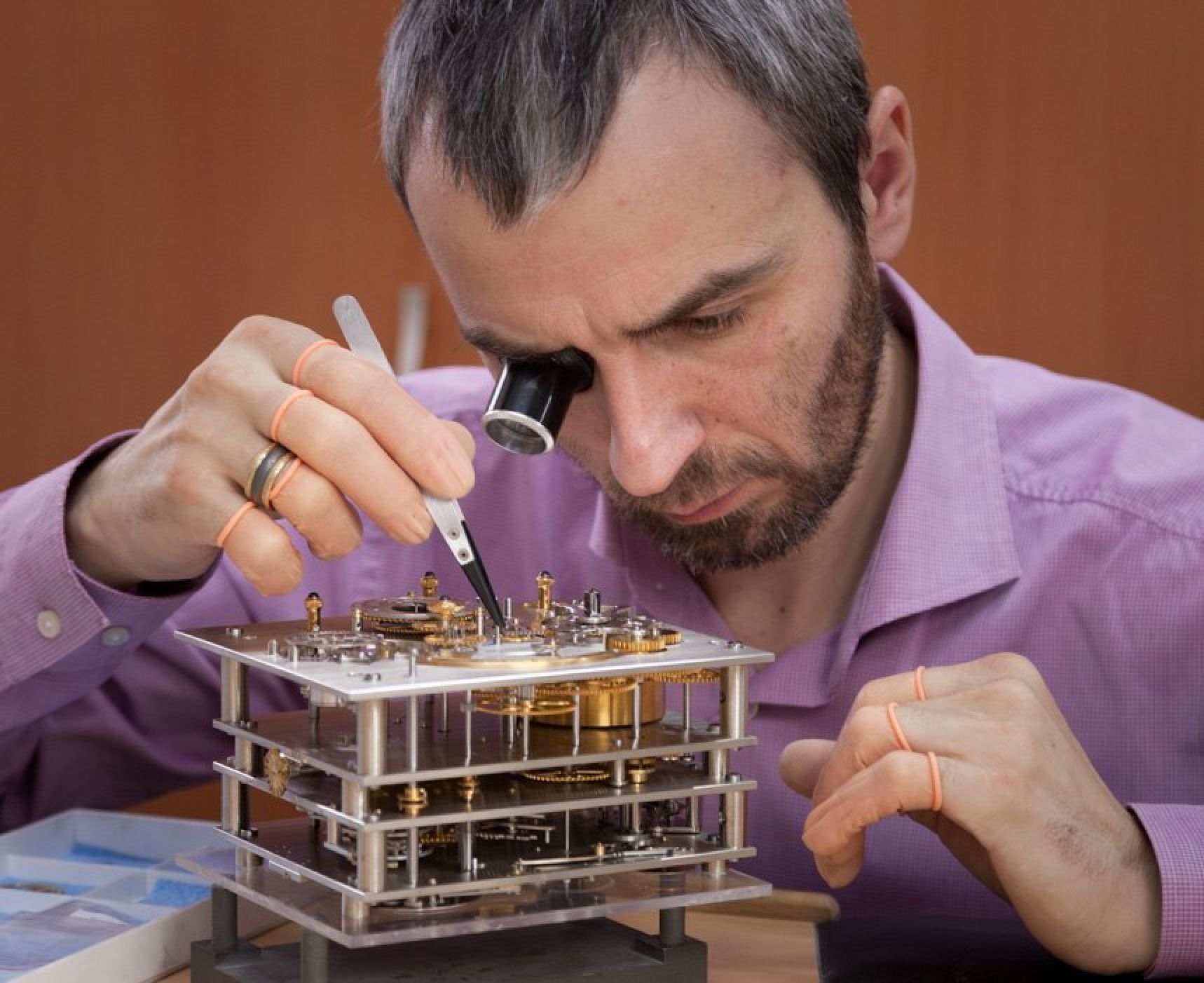 The calibre TCO.03-0 of the “Northern Computus Clock” was developed by Konstantin Chaykin and equipped with a mechanical device indicating the date of Orthodox Easter, as well as 15 other additional devices, complications, and indicators. The movement was made entirely at the Konstantin Chaykin manufactory according to the standards of haute horlogerie. Components finished using classical techniques: fine longitudinal and circular grindings; manual chamfering, polishing; spherical polishing of the axle tips; and galvanized plating of nickel and gilding. A distinctive feature of the movement is the “alpha” carriage design, a signature feature of Konstantin Chaykin’s table tourbillons, as well as a special component for installing dials on both sides of the case. 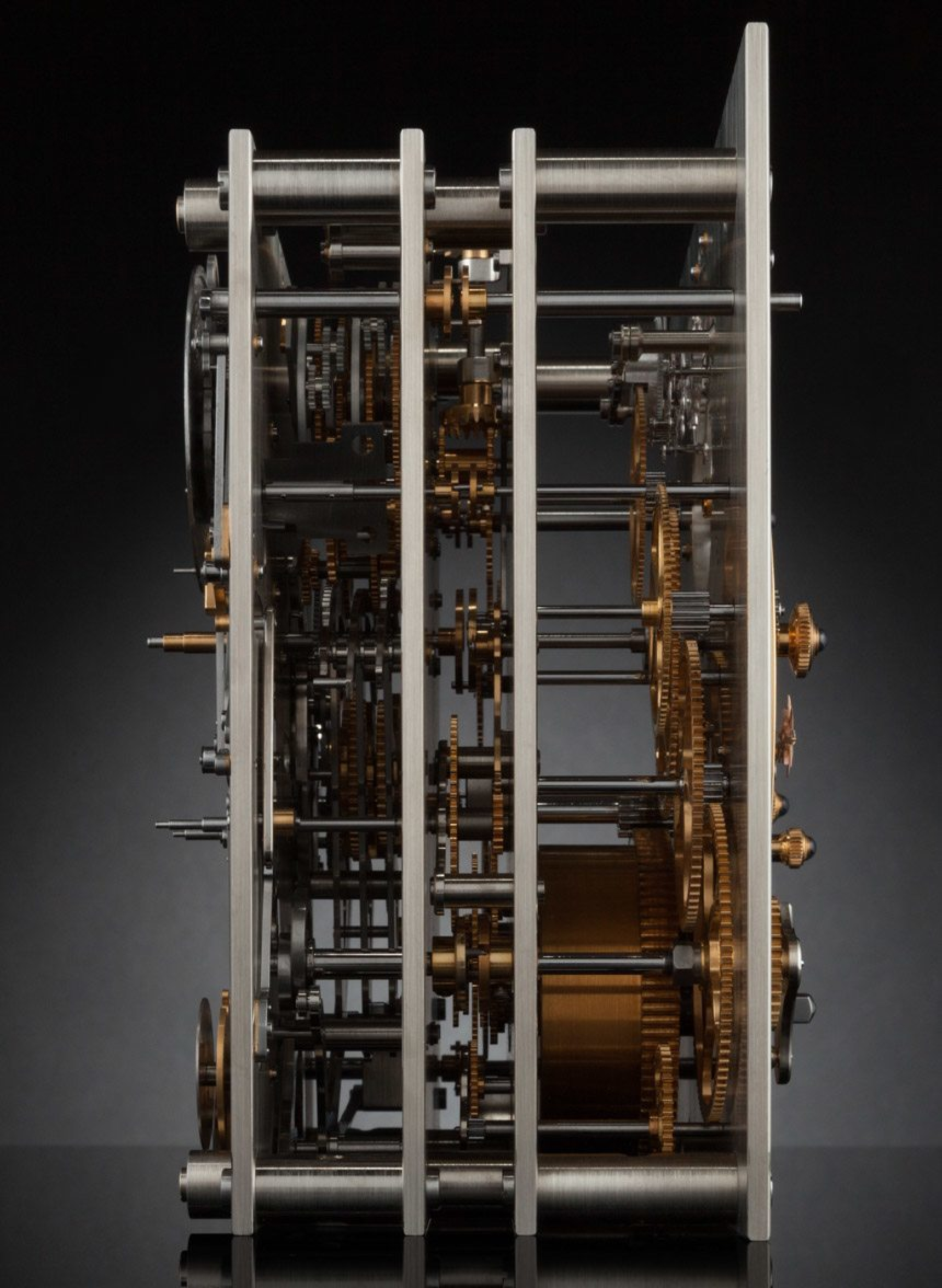 The complications of the Northern Computus Clock

(Hours, minutes, and seconds of the mean time are considered to be the basic functions of the movement and are not seen as complications.) 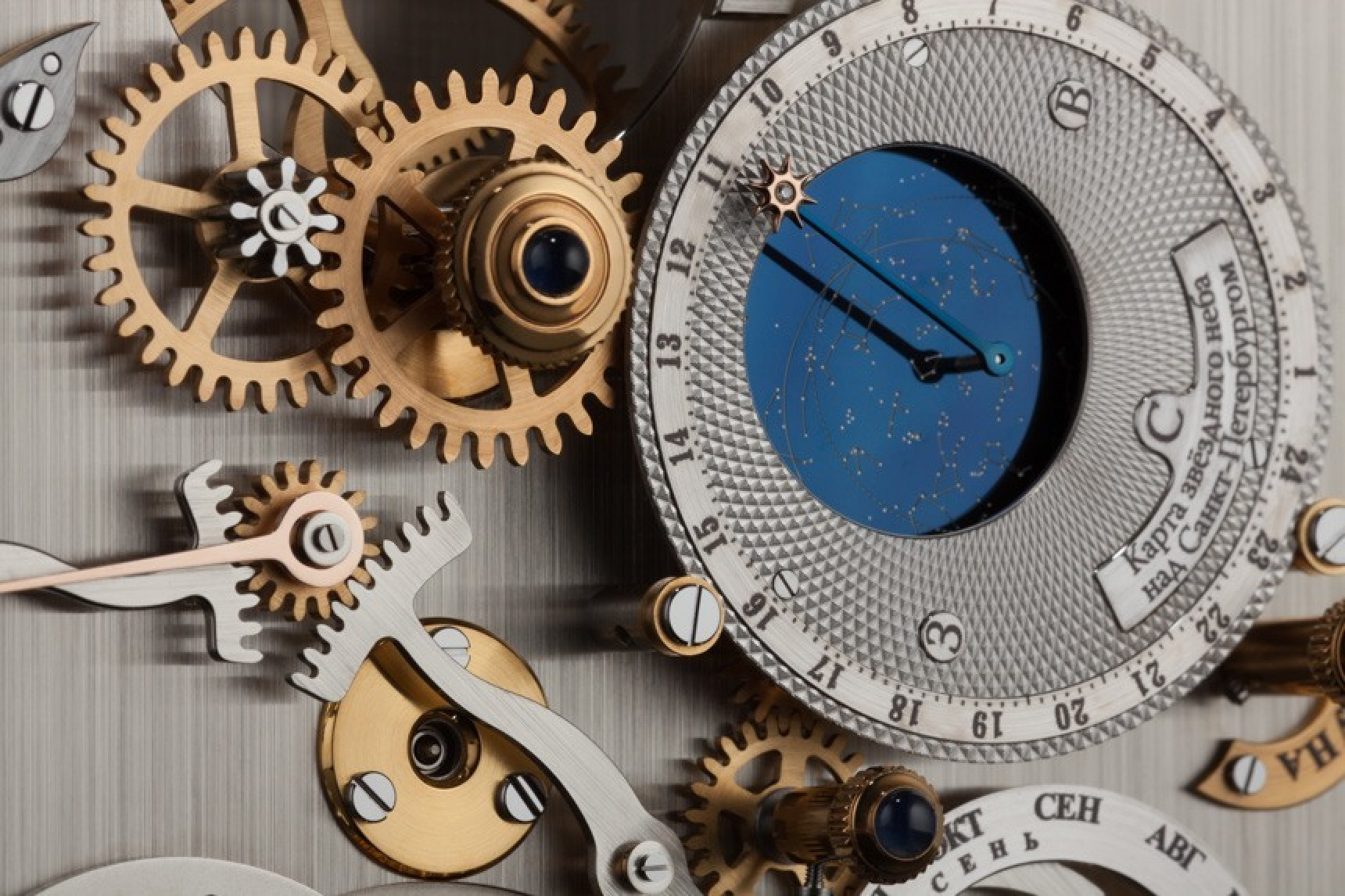 The “Northern Computus Clock” is not only the highest achievement of the Konstantin Chaykin manufactory, but of the entire Russian clockmaking industry. 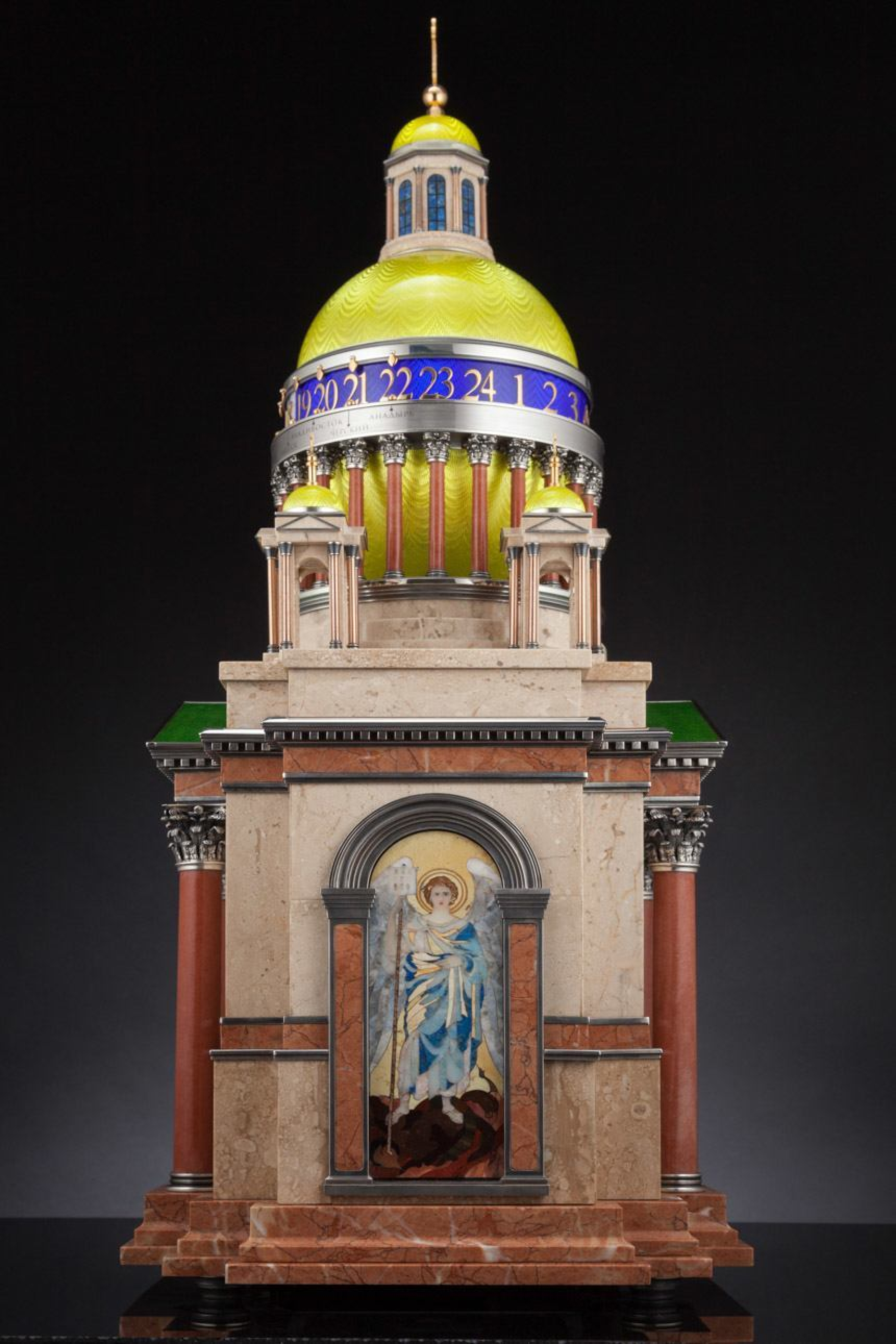 The supercomplicated astronomical table clock “Northern Computus Clock” was named by Konstantin Chaykin in honour of St. Petersburg, his home town, which is often called the northern capital. In the external design, the characteristic features of the architecture and décor of the city’s St. Isaac’s Cathedral, one of the most well-known historic symbols and tourist attractions of the city on the Neva, are unmistakably recognisable.

The “Northern Computus Clock”, Konstantin Chaykin’s third clock, was based on the devices for indicating the date of Orthodox Easter which he himself invented. Easter is a church holiday, the date of which changes every year. For that reason, such holidays are known as moveable feasts. For someone not deeply connected with such themes, the changing date of Easter, which happens every year, seems mysterious and unpredictable, as the calculation of this date requires special knowledge and the taking into account of many rules and restrictions.

The Metonic cycle, the solar cycle, indiction, Julian and Gregorian epacts, Julian and Gregorian dominical letters, great indiction , the date of the Paschal full moon…these are the basic concepts used to calculate the date of Easter. Konstantin Chaykin first made an in-depth study of the extremely complex algorithm for the calculation of the Easter date, then created his own calculation method, patented it and used it as the basis for his supercomplicated and completely mechanical device for automatically indicating the date of Easter – it alone consists of more than 300 parts.