Konstantin Chaykin, an inventor, and independent watchmaker devoted much of his life and energy to the creation of complicated mechanical clocks. Many modern watchmakers miss the great opportunity to show out their talents in this traditional watchmaking genre, which began with clocks.

The Foundation Tourbillon Clock table clock, which the master spent almost a year to make (from October 23, 2003, to the end of summer 2004), turned out to be a training option for Chaykin, a little door to the big world of Haute Horlogerie. It was a student masterpiece, a kind of the cornerstone of Chaykin's watch company - the "Konstantin Chaykin" manufacture. Moreover, the numerous difficulties that the amateur watchmaker had to face became a test, of whether or not the watchmaking could become his vocation. Having made another table tourbillon after the Foundation Tourbillon clock – the Carriage Tourbillon Clock, Konstantin Chaykin realized that, more than creating clocks and watches with classical complications, he was interested in creating pieces with complicated devices that he would rather invent himself. The idea of a clock with an Orthodox Easter date indicator has come all of a sudden and led to the invention and manufacturing of an Easter-themed series of four table clocks, which had no counterparts in the watchmaking world. In this particular clock, the master realized two versions of the Orthodox Easter date indicator he came up with: a positional design with two perforated disks in the Easter of Christ Computus Clock (2005), and a mechanical design with a hand indicating the Easter date in the Resurrection Computus Clock (2007), and in the updated version of the previous piece — the Northern Computus Clock (2015) and Moscow Computus Clock (2016). 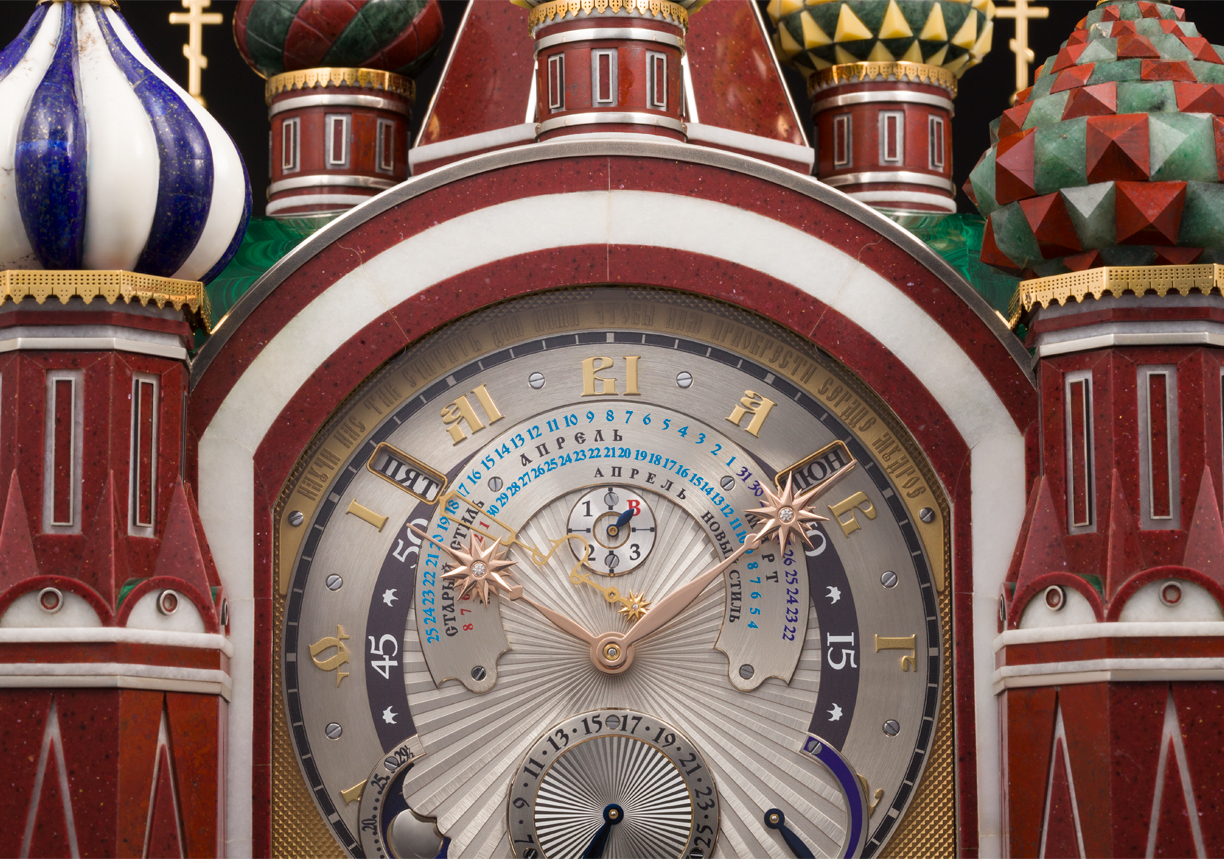 The Moscow Computus clock is the most complicated Russian mechanical clock ever made. In 2018, it was included in the Russian Book of Records in the category “The greatest amount of functions in a desktop mechanical clock” with a score of 26 functions. At the moment, after the number of complicated functions and devices was revised, this score has been updated and reached 27 positions. In the autumn of 2016, immediately after completing the Moscow Computus clock, Konstantin Chaykin began designing a new super-complicated table clock, which he could imagine only roughly. The chain graphic digital hour indicator, which he designed, had no counterparts in the world of Haute Horlogerie. Therefore, there was a long way to the final step of the idea development. 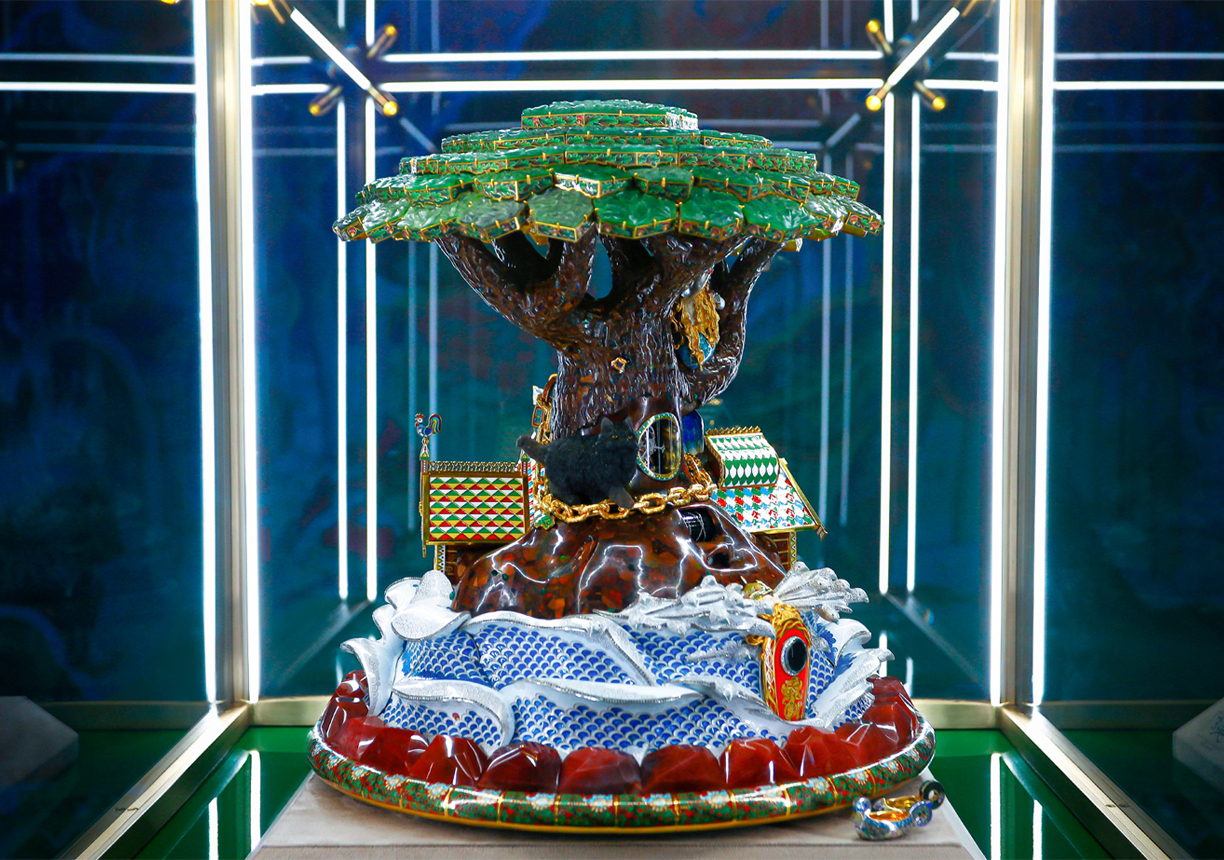 Creating something new is a process full of unpredictable circumstances. This rule, which defines the development of any complicated systems, has determined the fate of the new project: it stagnated for a long time, and the master has never come across this kind of stagnation before. The project, which started in the fall of 2016, was completed only in the spring of 2022. What happened after almost seven years?

The Lucomorye, a new masterpiece of Haute Horlogerie

The starting point in creating the image of the future Lucomorye clock was an association that suddenly came to his mind: if the design Chaykin invented has a chain wound around a shaft, why not connect the idea with the scenes from Pushkin’s poem “Ruslan and Lyudmila”, and precisely with the line “Golden chain on that Oak”? Moreover, a great date was approaching - 200 hundred years since the first publication of the poem ... 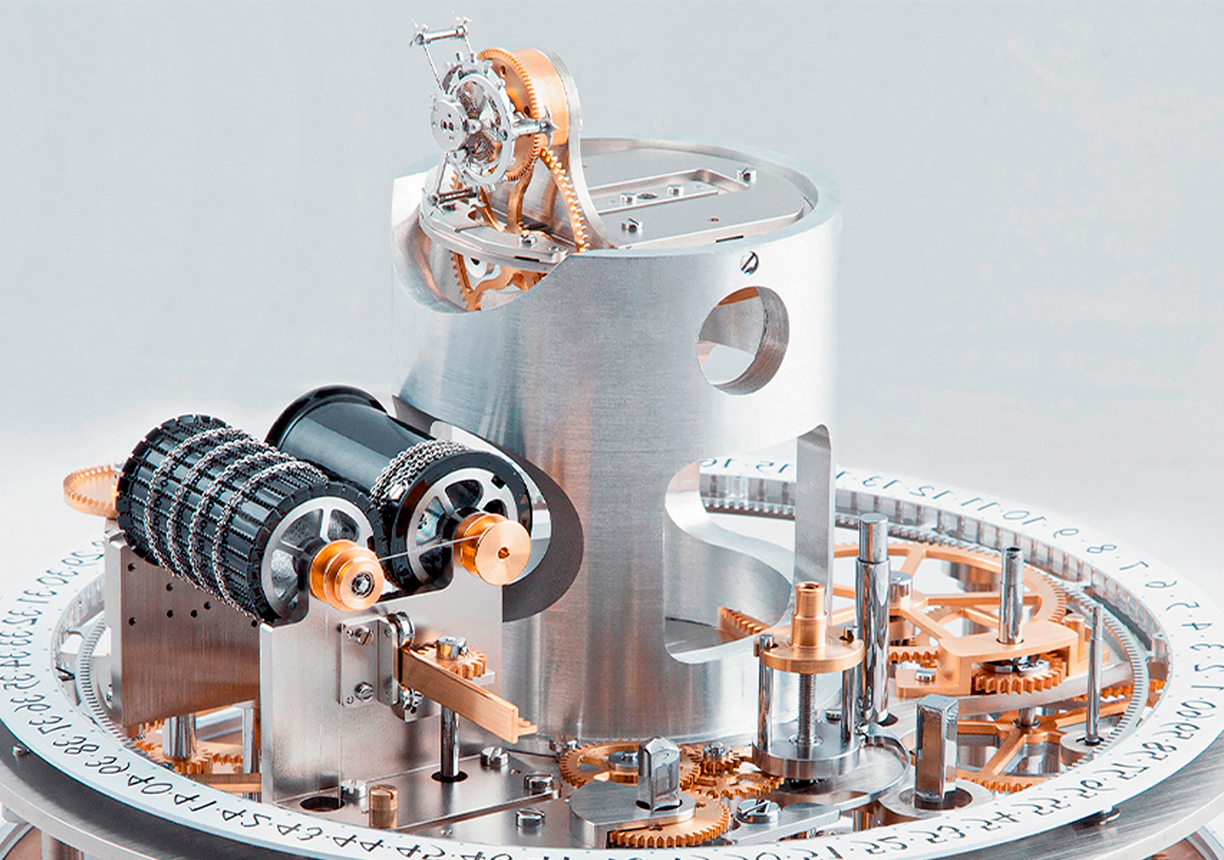 The movement with a horizontal arrangement especially for table clocks was developed by Chaykin for the first time. It is based on a design with four winding barrels — three of them store the energy required to drive the most complicated hour indicator, and the fourth winding barrel is driven by a tourbillon. The power reserve of the clock's movement is 8 days, the graphic system of hour indication is designed for the same period of action. The design of the tourbillon, which has maintained the signature “alpha” design (since 2007 it has been used in all Chaykin's tourbillon clocks), has been considerably redesigned. The Lucomorye clock uses a one-way attachment scheme for the axle of the carriage. In other words, the tourbillon does not have a second (upper) bridge. Moreover, the tourbillon itself and its driver wheel are placed vertically, and a special hollow-shaped aperture is provided for the tourbillon in the fairytale Oak. 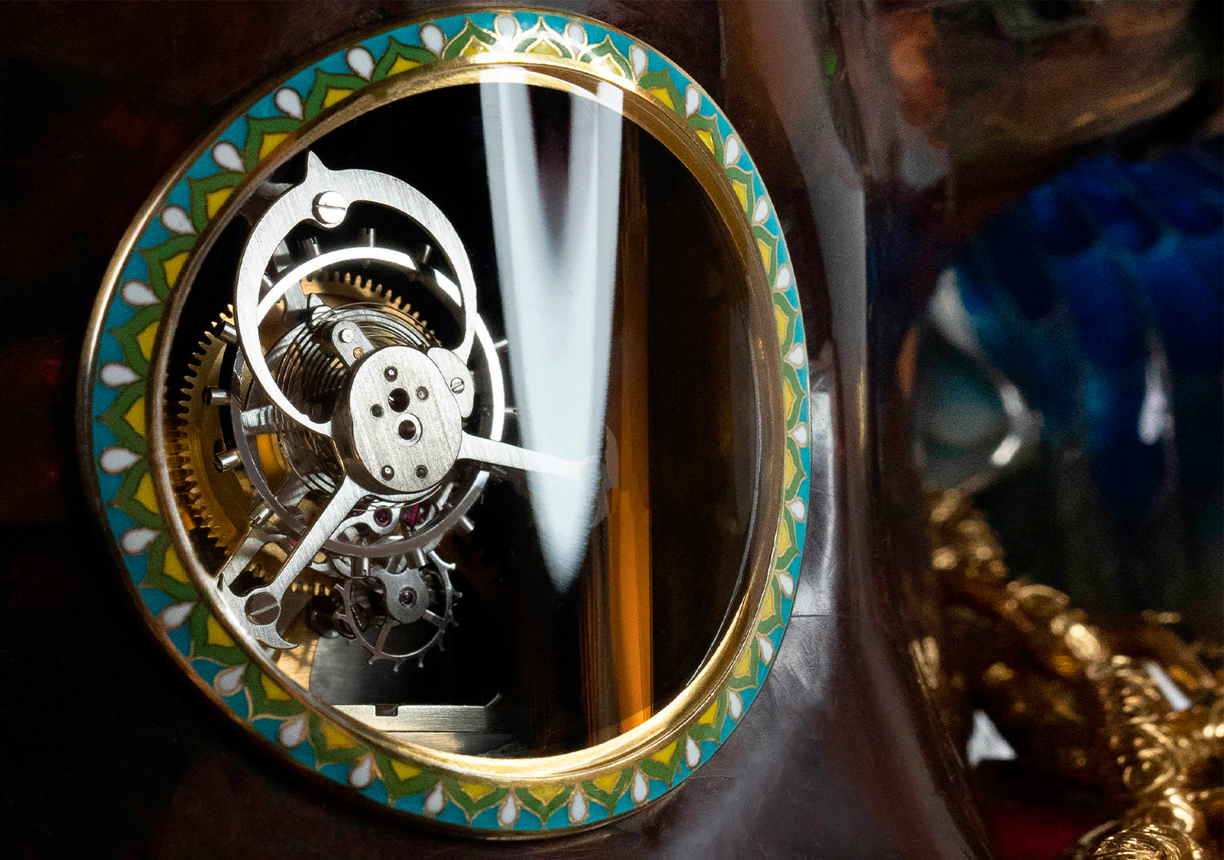 Minutes and date indicators have rings. This is one of the earliest traditional types of indication in watchmaking. In addition, the minute hand uses a prismatic reflector. The power reserve indicator is also unusual - its design is vertical, and the indicator itself is made in the form of a bug walking along the tree. 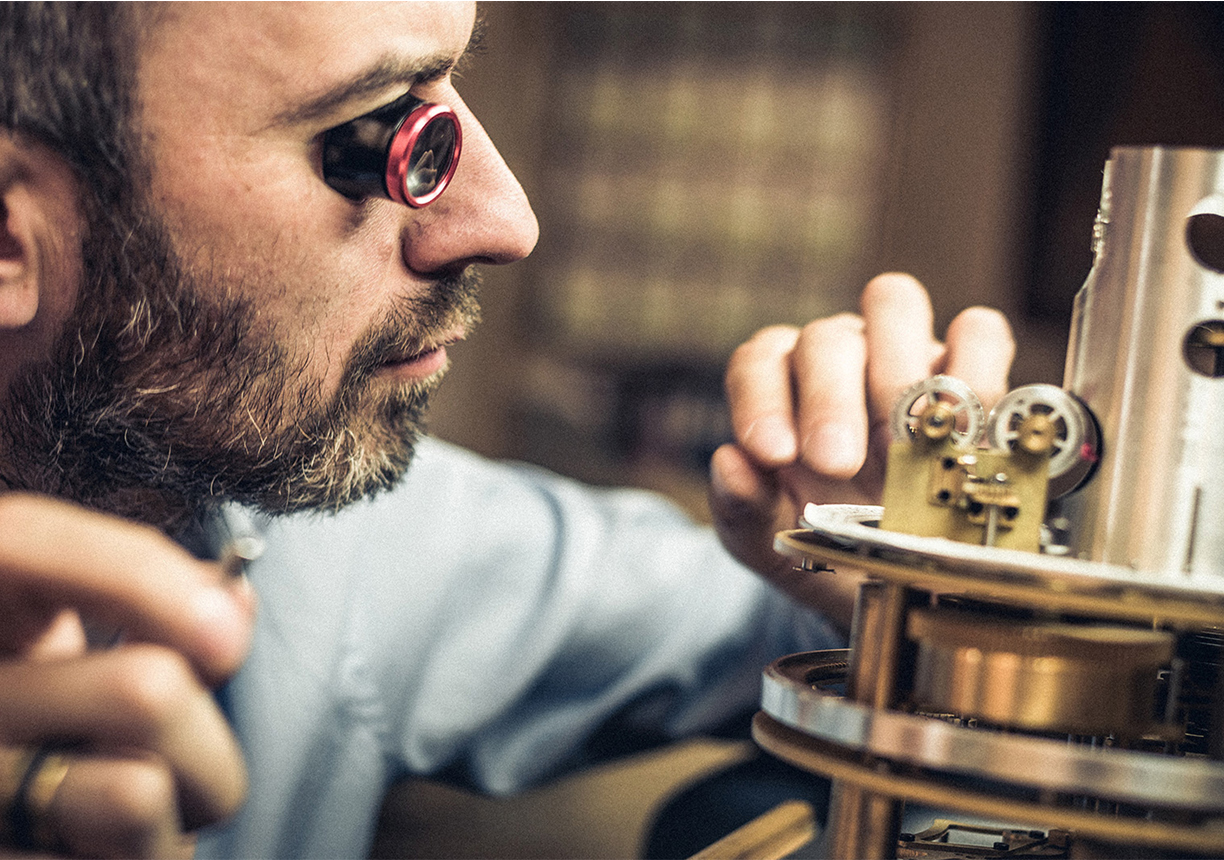 The chain graphic digital hour indicator, invented by Konstantin Chaykin at the beginning of 2016 and patented by him in May 2017 (patent RU2619032; patent application filed in March 2016), was supposed to be used in wristwatches. The master made a prototype of this indicator, and after testing its functions in metal turned out to be disappointing for the watchmaker: the work of the device involved large movements of the shafts with the chain and the positioning carriage, as a result of which its operation required too much energy by the standards of a compact wristwatch movement. Chaykin had to abandon the thought of implementing the idea in wristwatches, but the prospects for using it in large table clocks looked much more encouraging and attractive. 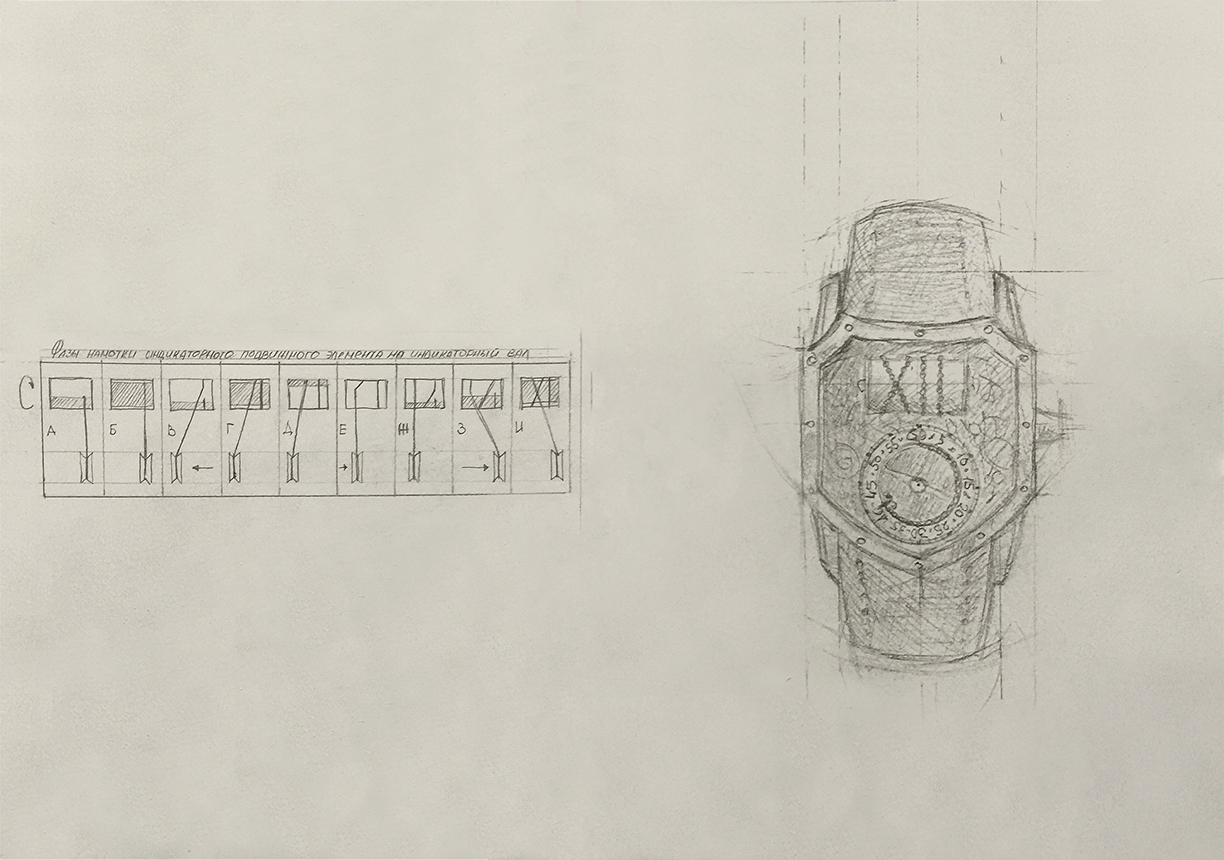 These are all the complicated functions and devices. Although the TLU.04-0 caliber (the Lucomorye clock movement) belongs to the category of super-complicated ones, there are relatively few complications in it. It is unsurprising, though. Most of the 1119 parts from which the Lucomorye movement has been assembled are used in the chain graphic digital hour indicator. This puts the Lucomorye clock in one row with the former super-complicated masterpieces of Konstantin Chaykin - Easter-themed clocks, the Easter date indicator of which has the same feature: in order to achieve a rather simple function with a single hand, one should use an extremely complicated device. This particular type of device was placed on the Easter-themed clocks and was assembled from 300 elements. 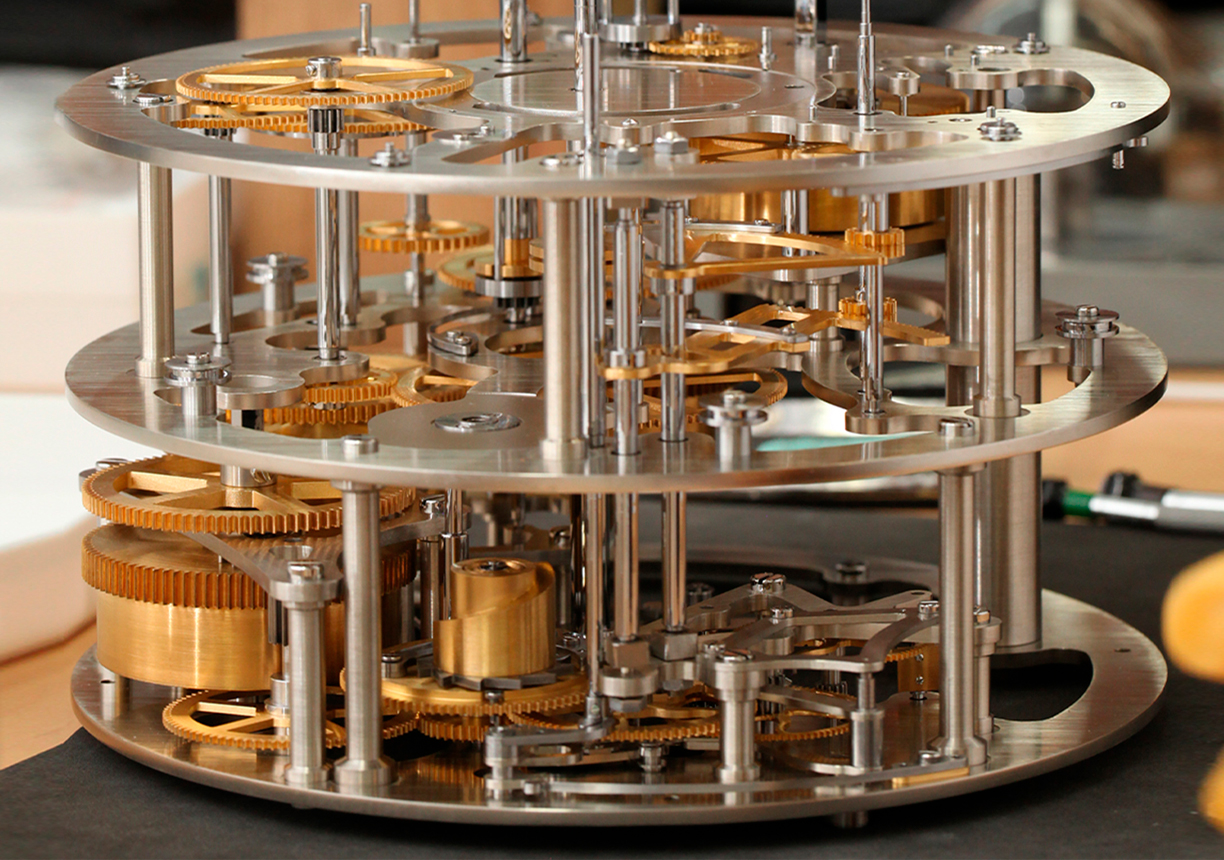 If the Easter clocks created by Konstantin Chaykin determine the date of the upcoming Easter once a year - at the moment of switching the calendar device of the movement from the old year to the new one, then in the Lucomorye clock the chain graphic digital hour indicator is, in fact, a 100% mechanical computer. It calculates exactly how the coming hour should be displayed, at the end of each hour. This device determines it automatically, with no effort from the owner required. Thus, it works 24 hours a day, throughout the year, in one rhythm with the non-stop rotation of the tourbillon, perhaps the most harmonious complicated device in Haute Horlogerie. 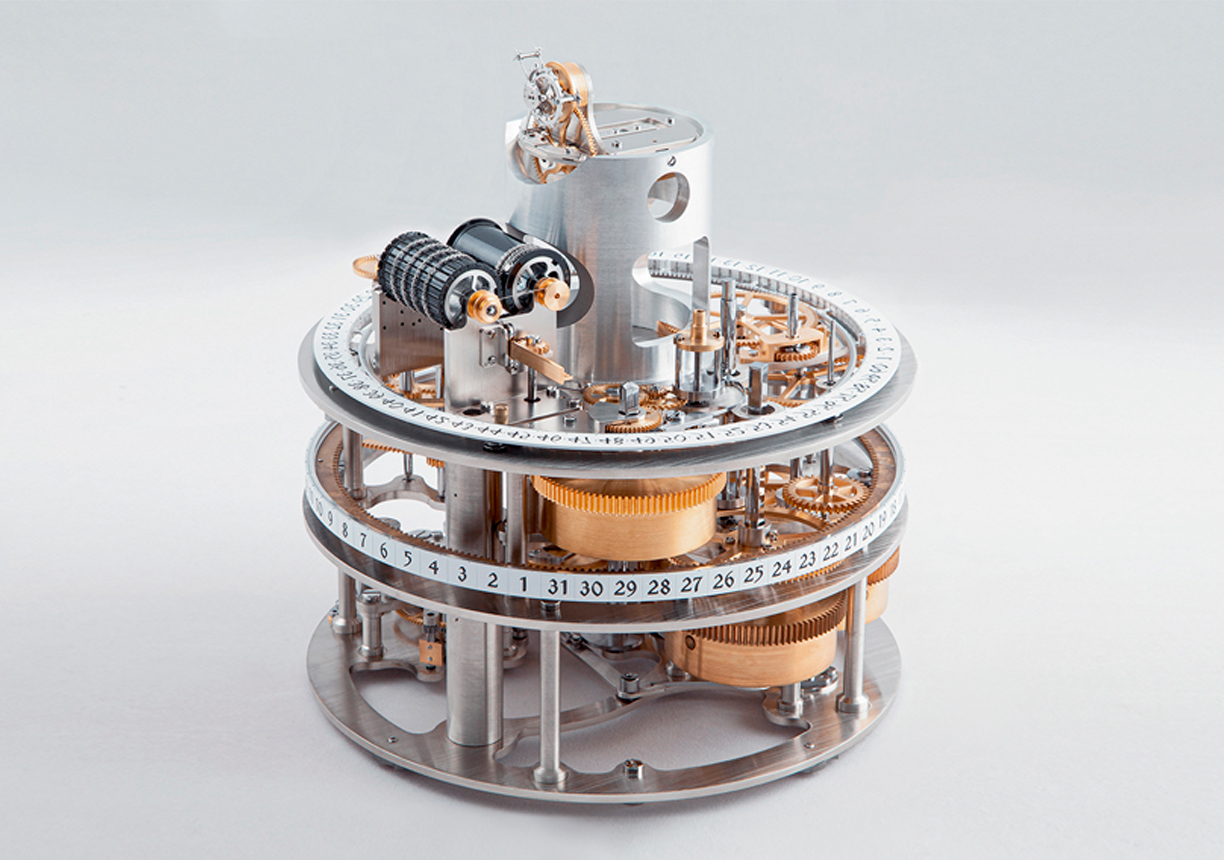 Then Lucomorye, a new masterpiece of jewelry art

The atmosphere of wonder in the introduction to the poem "Ruslan and Lyudmila" required an applicable embodiment in the Lucomorye clock, so Konstantin Chaykin decided to ask for the help of an expert, as he had already practiced before in his work on other table clocks with sophisticated decor, including the famous Moscow Computus clock. A few years before the aforementioned events, in 2012, the master has got acquainted with the work of the outstanding jeweler Ilgiz Fazulzyanov, the founder of the jewelry brand named Ilgiz.F. The reason why Chaykin has chosen him was the exhibition titled “Jewels inspired by nature. Ilgiz F.", which was held in the Exhibition Hall of the Assumption Belfry, Moscow Kremlin in 2016. Konstantin Chaykin invited Ilgiz Fazulzyanov to work together on super-complicated clocks, and Ilgiz decided to take on the duties of co-author of this prominent project. 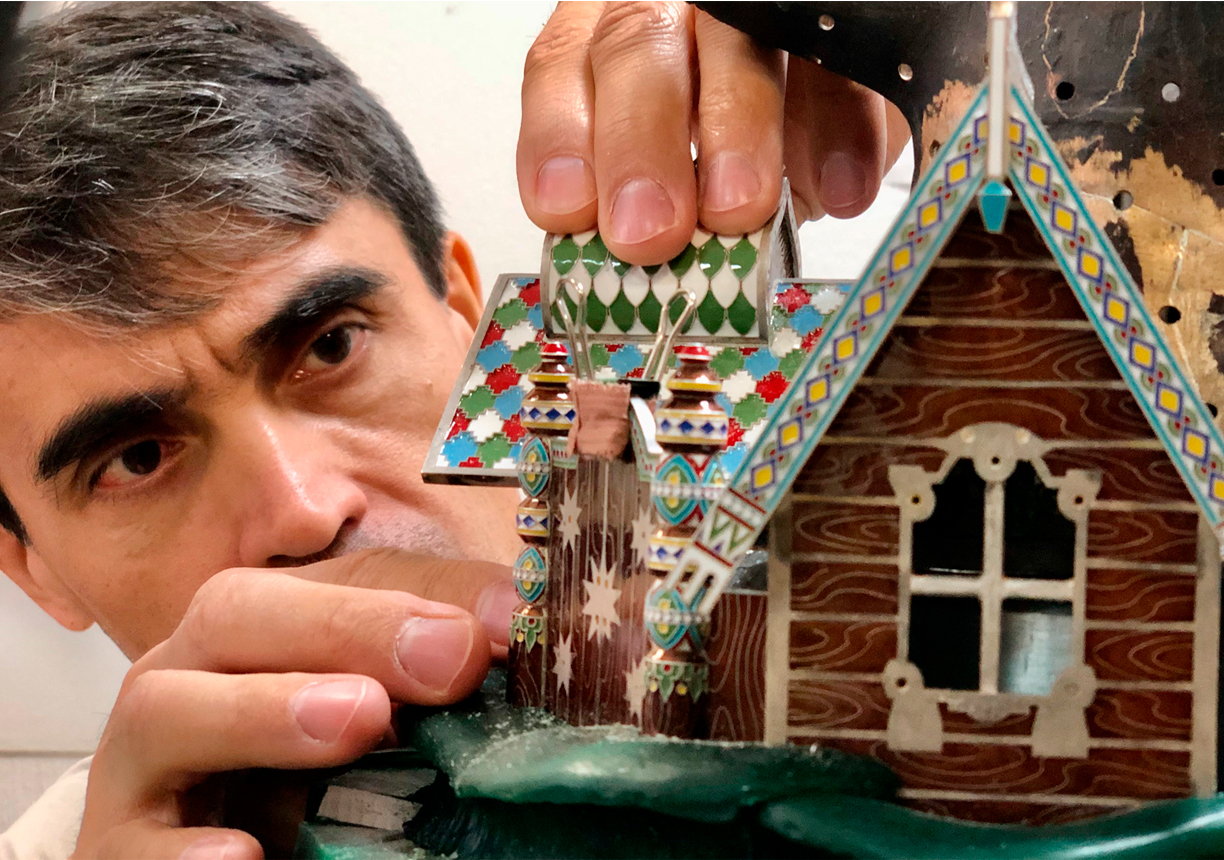 Thanks to Ilgiz Fazulzyanov, the ultra-complicated mechanics of the Lucomorye table clock received a unique, chic, and exquisite jewelry design. Ilgiz Fazulzyanov, a famous master of jewelry "with the story", quickly managed to find a successful idea that completed the composition. The image of Pushkin's 'Lucomorye', including the learned Cat, the mermaid, Chernomor, as well as the Oak, the hut perched on chicken legs, stones, and the sea waves smashing against them, created by the master, threatened to turn the composition into a set of disparate elements - a real nightmare for an artist. Ilgiz Fazulzyanov solved this problem, which is considered to be common for all multi-figured compositions, by introducing a unifying visual rhythm. According to his plan, the rhythm can be traced both in the lower ridge of faceted stones fighting the waves, and in the crown of a wonderful oak, which is broken into many plates - the outlines of the same stones are unmistakable. The base of the crown is a spatial structure of many elements that resemble oak leaves, jade plates with carved leaf contours attached. Each plate is fixed in castes, which are decorated with oak leaves and acorns, made in the technique of hot cloisonné enamel. Another element with the same rhythm is the oak trunk, decorated with Australian boulder opals and Ethiopian fiery opals. Multi-colored reflections and the way light falls on opals give the whole composition a sense of miracle and mystery. 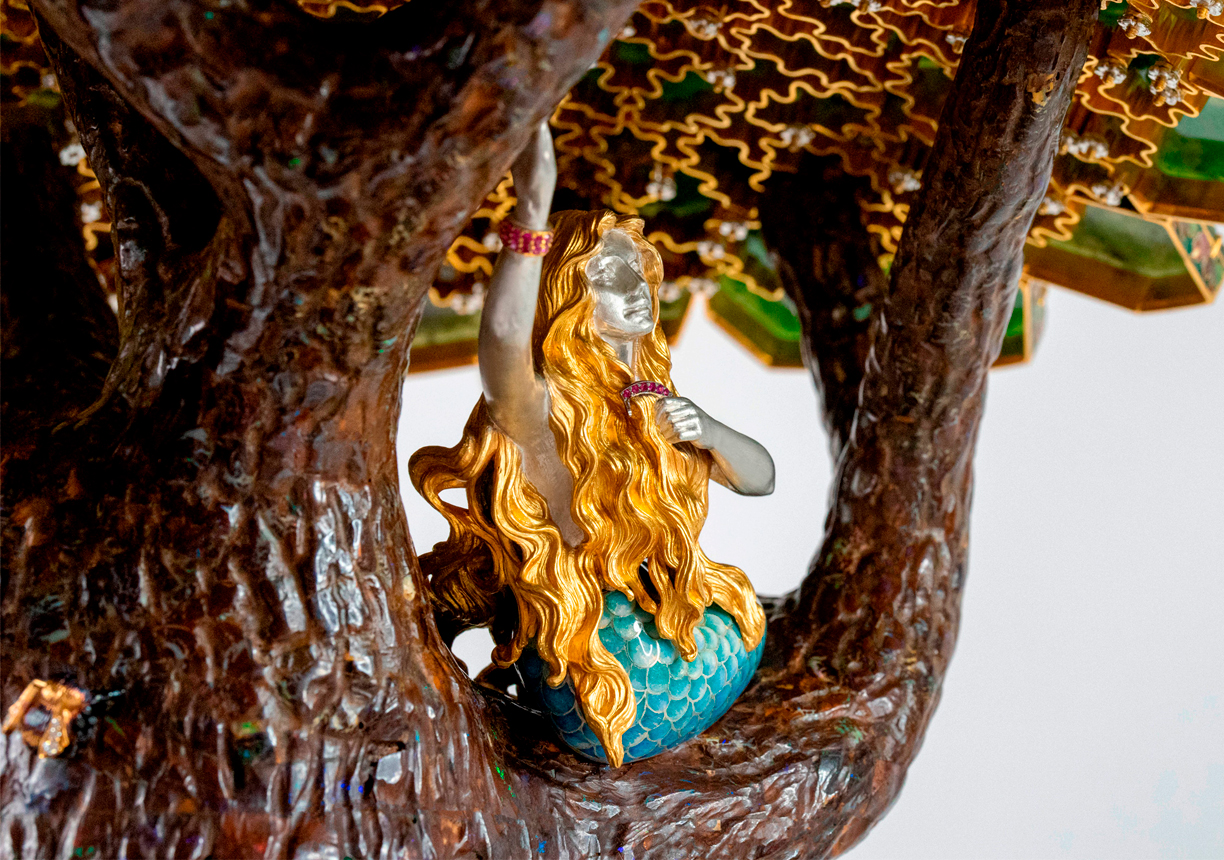 Ilgiz Fazulzyanov had to use all his experience to bring his plan to life. And yet, the work proved to be extremely difficult even for his talent. Problems arose both because of the composition's complexity, and also because it was necessary to use many components, the unusually large size of which required the adaptation of seemingly tried and tested production methods. 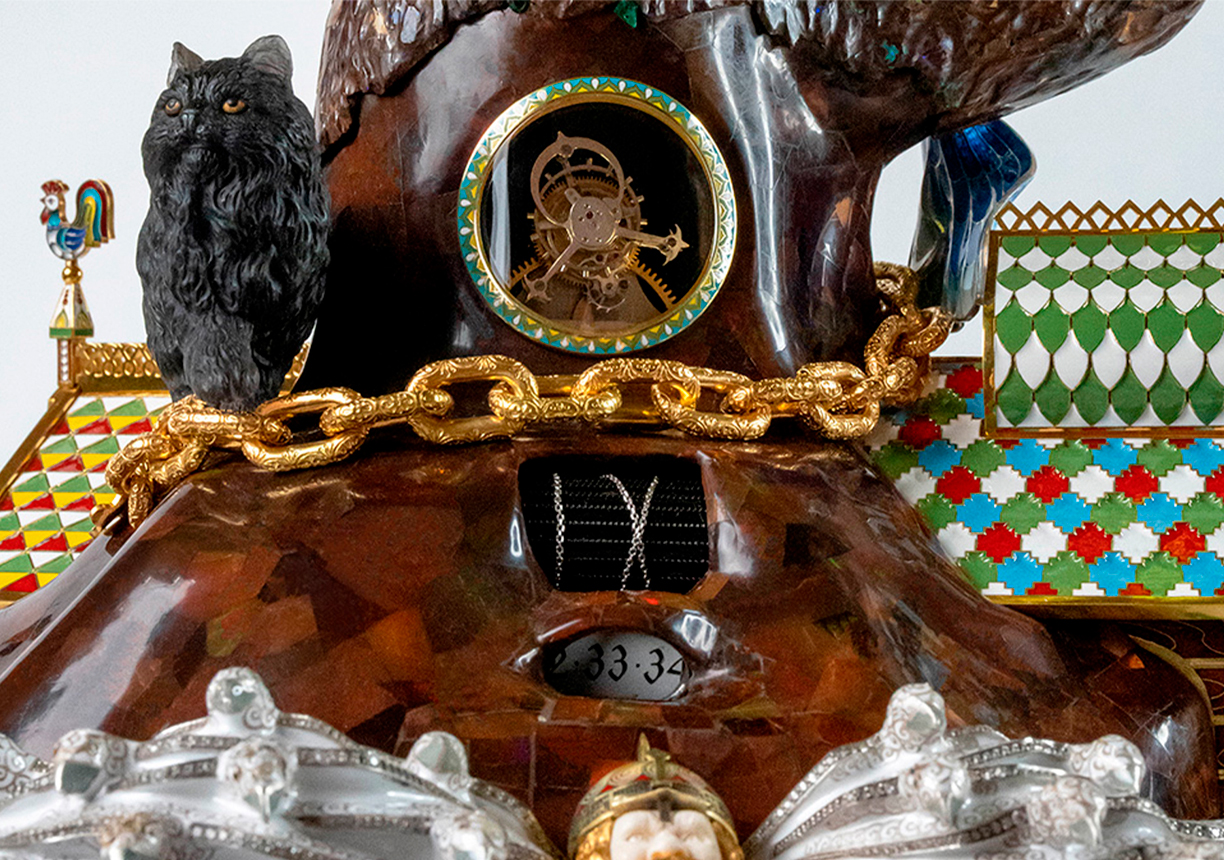 Nevertheless, talking is one thing, doing is another, the inevitable technical problems have been solved, and the Lucomorye clock, a new masterpiece of jewelry and Haute Horlogerie, has finally been completed. It took more than six years to finish, and the result is impressive.