Having spent about two hundreds and fifty Martian sols with a Mars Conqueror watch on his wrist, Konstantin Chaykin is ready to share his impressions of the watch and his plans for the future. As it was conceived by master and inventor of Mars Conqueror watch, it can be used both on the surface of our planet and by the future conquerors of the “red planet” during space travel to it as well as on its surface further on. The watch is designed for simultaneous indication of local time and standard or UTC time on Earth, of average solar time on Mars, and of additional space and astronomical functions – Konstantin Chaykin had implemented in the watch movement 8 complications in total.

Highly complicated watch mechanics of Mars Conqueror watch was obviously required to be meticulously proved and tested, especially if we will take into account 175 parts used for assembly of display module and the fact that the number includes as many as 30 wheels. Therefore, before disclosing information about the new Mars Conqueror watch to the public, Konstantin Chaykin had decided to perform it’s thorough all-around testing. Caliber K20-1, the original version of the Mars Conqueror MkI prototype movement, as well as the prototype itself were presented to public in a friendly privity manner in Moscow on July 27, 2018, at the very moment of the closest opposition of the Mars and our planet. Meeting the persistent interest to the project expressed by numerous collectors and friends of the brand during Basel World-2019 fair Konstantin Chaykin had finally decided to present to the public his Mars Conqueror watch. April 12, 2019, the date of official presentation, was chosen because it is the International Day of Human Space Flight, celebrated annually around the world in honor of anniversary of the first manned space flight, which was performed on April 12, 1961 by the Soviet cosmonaut Yuri Gagarin on the Vostok-1 spacecraft.

The development of the first truly Martian and fully mechanical complicated watch is a long and laborious process, while the same thing we may say about the preparation for the first manned flight to Mars. During testing the first prototype of the Mars Conqueror watch therefore described by Konstantin Chaykin as “Mars Conqueror MkI”, the performance and functions of the originally developed movement was confirmed entirely. The testing had revealed two minor technical bugs that, however, do not have a destructive effect on the overall functionality of the watch. Nevertheless, Konstantin Chaykin had decided to improve Caliber K20-1. In particular he eliminated the backlash of the wheel system of the Martian time dial as well as modified the design of the rocking bridge in the Martian time indication module, thus allowing to disengage wheel without switching the module to the correction of Coordinated Universal Time (UTC), that was necessary in the original design of Caliber K20-1. 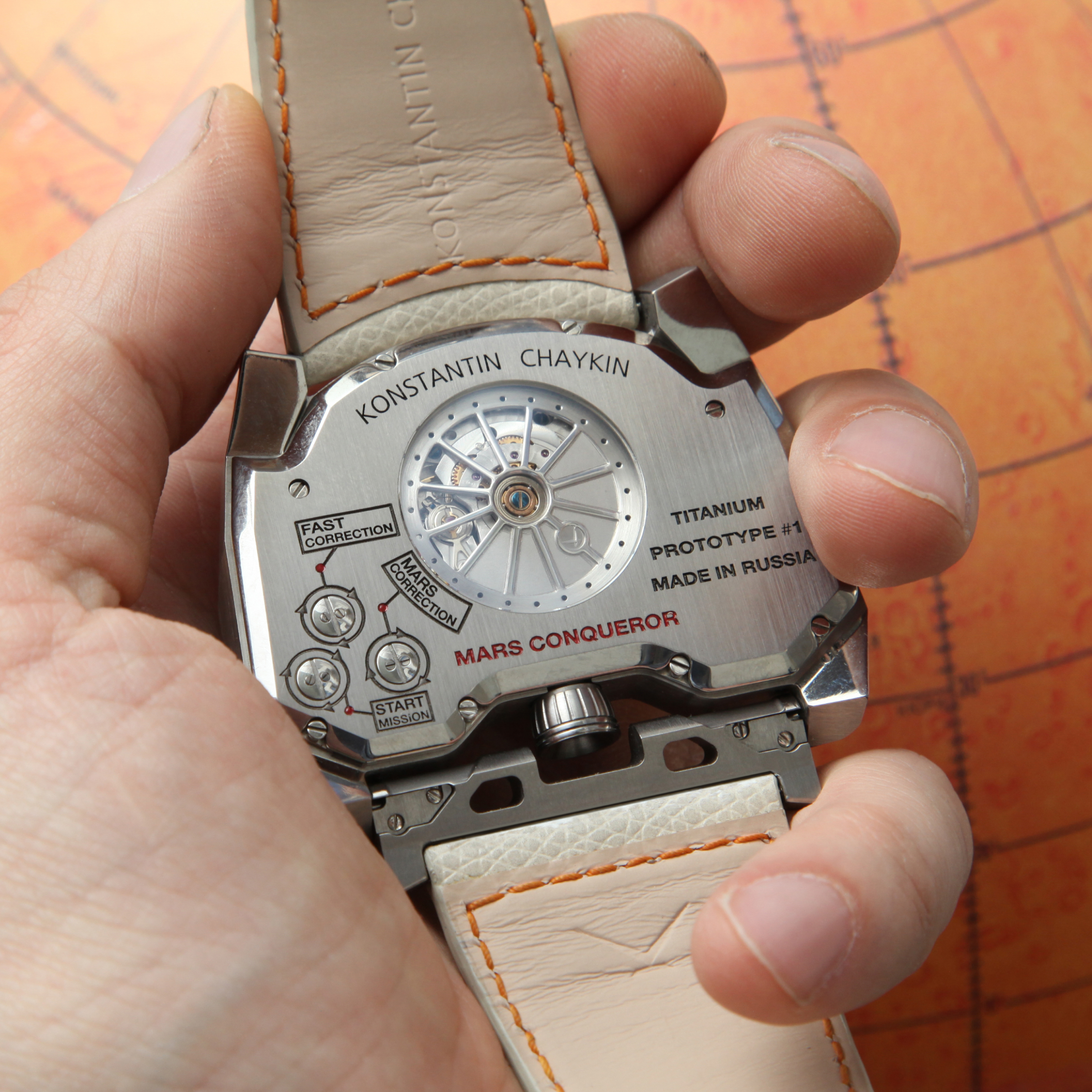 Alongside with the improvement of the complicated watch mechanics Konstantin Chaykin had decided to develop a new design of the Mars Conqueror watch. The design of the original prototype Mars Conqueror MkI was inspired by the dashboard instruments of the 1960s Soviet spacecrafts, the same approach will be held by Konstantin Chaykin in further developments of Mars Conqueror watch. The shape of Mars Conqueror MkI case was determined by the unusual watch movement formed as triangle, that is extreme rarity in watchmaking. Thanks to that the movement itself got the dynamic futuristic outlines of a spacecraft. Unique and extraordinary appearance of the watch was further emphasized by the use of three separate dials, intended for the indication of Earth time (in the center), of Martian time (leftward) and of Martian date accompanied by the indicator of planets astronomical position (rightward; may also be used to indicate the duration of the Martian mission in soles). The dials’ distinctive appearance with technically styled scales, drawn in a minimalistic military way, is perfectly paired with an unusual multifaceted titanium case of complicated shape and specific softly rounded bezel adorned with refined matte finish. Therefore, Mars Conqueror MkI watch looks like impressive implementation of 1960s space technics’ style. Watch’s conical crown, placed into case recess meticulously performed at 6 o’clock, instantly resembles by the shape and finish the nozzle of a spacecraft’s jet engine. The final touch of the design is a white leather strap with contrasting orange stitching and distinctive decoration by white fabric used for tailoring Russian space suits… So Konstantin Chaykin’s message is obvious: he will not stop to invent new watch straps – again and again.

However, presenting Mars Conqueror MkI prototype to the public, Konstantin Chaykin does not reveal all his trumps. He had already developed a new striking design of Mars Conqueror MkII watch, to be released in a limited edition and revealed in the fall of 2019. 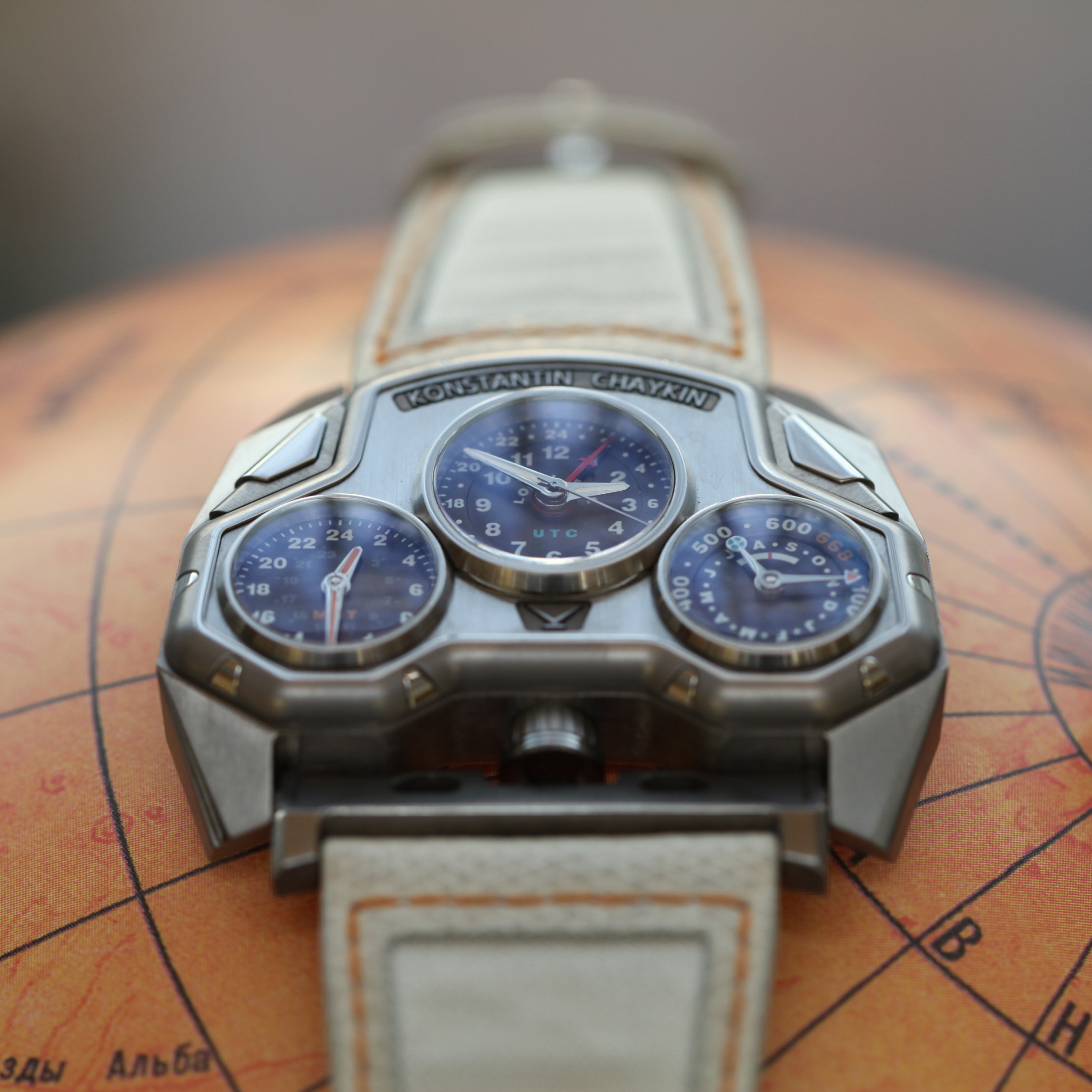