November 6th 2021, Geneva. At the Only Watch charity auction, held by Christie’s, Konstantin Chaykin’s uniquely complicated mechanical watch Martian Tourbillon Only Watch 2021 Piece Unique sold for a record-breaking price, not only for Konstantin Chaykin, but for any watch ever made in Russia. After a dramatic bidding process lasting just a few minutes, the anonymous winning bidder paid 200,000 Swiss Francs, or about 15,000,000 rubles at the current exchange rate. 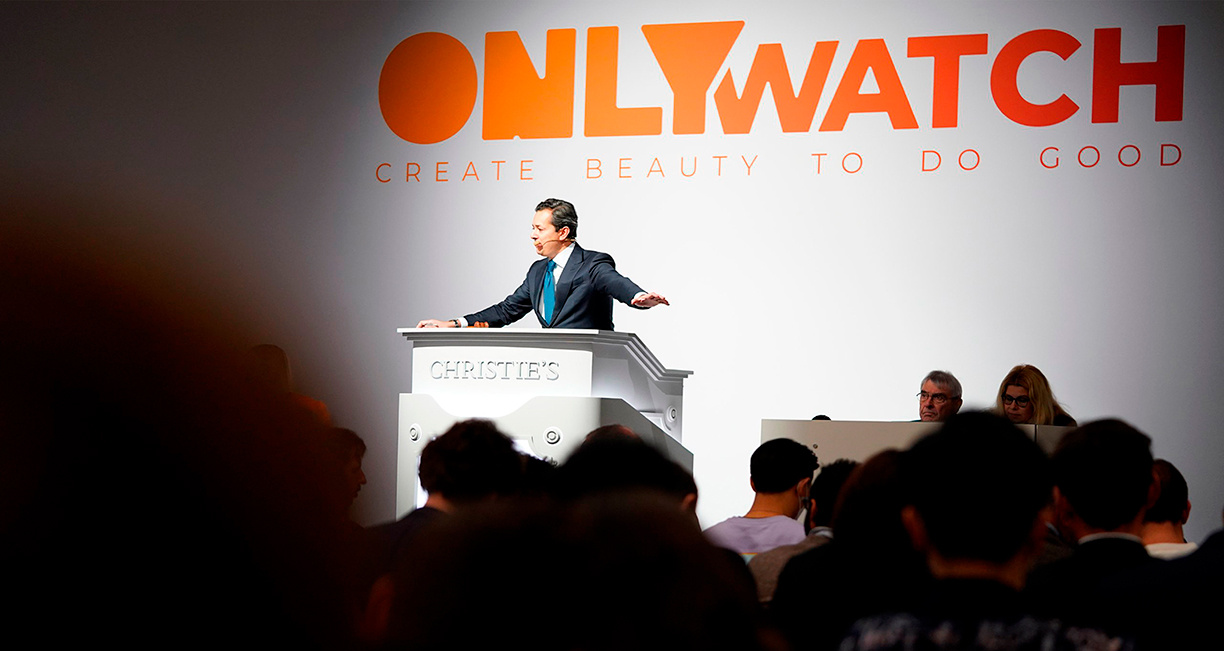 It has been 226 years since Abraham-Louis Breguet’s invention of the tourbillon in 1795. During this time, on the basis of this great master’s concept, a huge variety of designs of this magically attractive device of complicated watch mechanics have been developed, from the poor-man’s dollar tourbillon, Bahne Bonniksen’s karussel, and the flying tourbillon regulator by Robert Benson North, to modern-era tourbillons, with a built-in constant force escapement, double and triple axis tourbillons, double and triple tourbillons, and finally resonance tourbillons and stop-seconds tourbillons operated either at the owner’s request or automatically under the action of a mechanical algorithmic device (the honour of inventing the latter belonging to Konstantin Chaykin himself, implemented in his Shabbat Clock).

Watchmakers include a tourbillon in their timepieces for a number of reasons – for the precise measurement of time (reflecting the original aim of its invention), for setting records for precision at chronology competitions, for demonstrating the skills of a watchmaker – since the tourbillon’s intricate, challenging design is by no means attainable for everyone, for the marketing of a watch brand, as a way to implement a mechanical kinematic wonder in a timepiece – a way to entertain its owner, for technical watches (for aviation or diving, for example), for jewellery and decorative watches… The only reason missing in our cosmic age is to create a tourbillon which could be used by conquerors of other planets. This has been resolved by Konstantin Chaykin with the first-ever Martian tourbillon in the history of watchmaking – the Martian Tourbillon Only Watch 2021 Piece Unique.

The new conceptual watch Martian Tourbillon Only Watch 2021 Piece Unique is a symbolic merger of three developments used by the Russian master in different periods of his creativity. First of all, true stainless bulat steel, first used in the Lunokhod watch and later in the Joker Selfie watch, created as a unique piece for the charity auction Only Watch 2019. Secondly, a joker-indication, invented by Chaykin in 2017 for his Joker watch and other models of the Wristmons collection. And thirdly, the Mars Time Program and watch mechanisms and functions invented by Konstantin Chaykin, designed for use in space travel and on Mars.

On 22nd September of this year at Monaco’s prestigious Monaco Yacht Show, a world tour of the best examples of haute horlogerie begins, created by the foremost watchmakers in the world for the charity watch auction Only Watch 2021. Konstantin Chaykin has created for this auction the unique wristwatch Martian Tourbillon Only Watch 2021 Piece Unique, with the world’s first-ever Martian tourbillon, making a rotation every 61.65 seconds – the length of one Mars minute – and hands set up to indicate Martian time. It is also worth noting that this is the first tourbillon wristwatch entirely created in Russia. 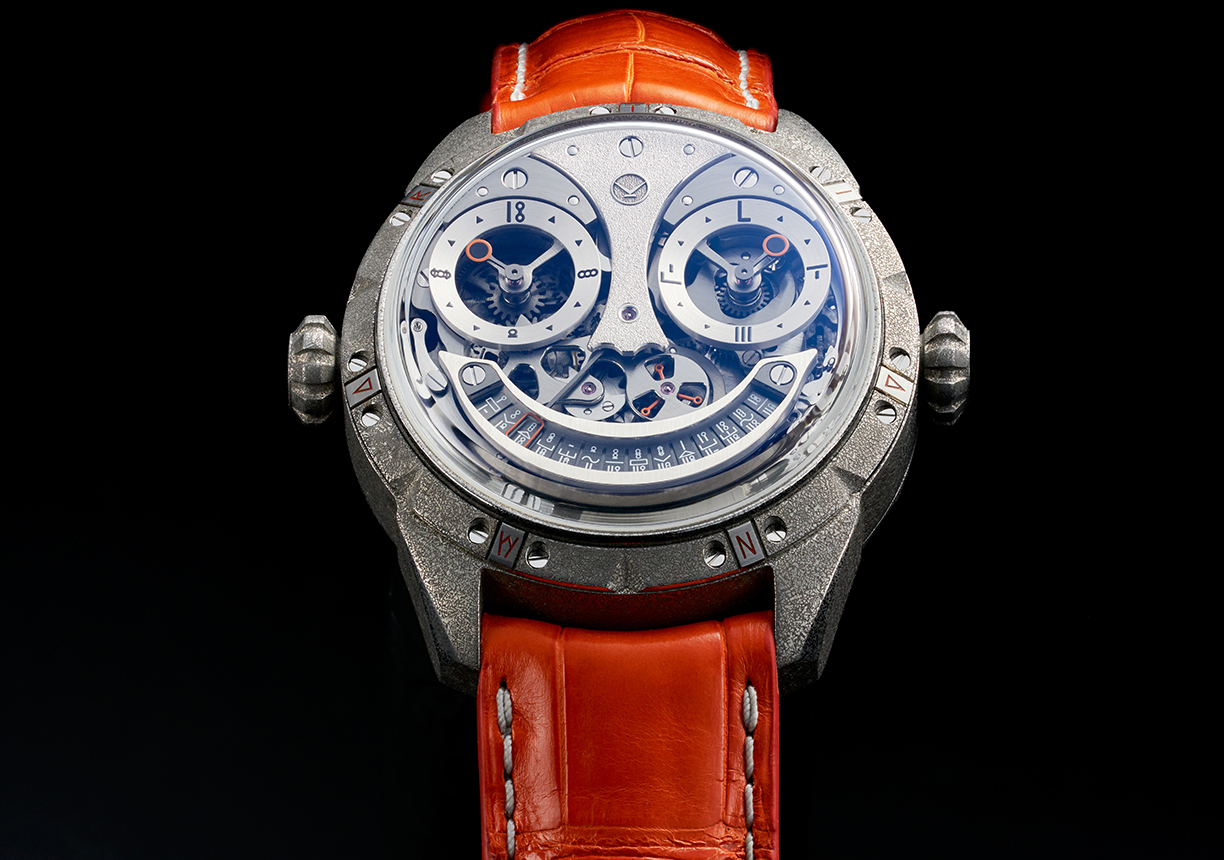 This watch features the world’s first implementation of a Martian calendar complication, which operates according to the calendar system algorithm developed by the American engineer Thomas Gangale. His Martian calendar has an interesting aspect – every month consists of four weeks, and must start from a Sunday. This allowed Konstantin Chaykin to design a unique calendar indication, which uses just one hand on one scale to show both the date and the day of the week. Life on Mars should have its advantages! The date indication scale is on two rows, with the upper row used to show the first and second weeks, and the lower row showing the third and fourth weeks. The understanding of the current period of the month is helped by the two-week period indicator, located above the Martian calendar smile, with three Martian digits representing ‘1’ corresponding to the first and second weeks, and three Martian digits representing ‘2’ corresponding to the third and fourth weeks. The two date scales are separated by the Martian day of the week scale, marked with symbols also invented by Konstantin Chaykin

The unique synchronous retrograde indication of the Martian date and day of the week in the Martian Tourbillon Only Watch 2021 Piece Unique wristwatch is far from being as straightforward as it appears at first sight. The retrograde indication method was chosen for this watch by Konstantin Chaykin for a simple reason – he decided to create his own Martian Wristmon, combing his Mars Time Program and the design elements of the incredibly successful Wristmons collection. The Wristmons trademark smile had to be shown off in its intended place – no other option could even have been considered – which turned the task of designing the indication module into an incredibly challenging one. The dimensions of the calendar complication’s snail cam are limited by the space which could be found for it inside the watch mechanism. Therefore, in order to guarantee the error-free operation of the calendar, it was necessary to design and manufacture extremely precise components for the nod, most notably the snail cam and probe lever. In addition, Konstantin had to make extraordinary efforts during the development of the calendar in order to remove the inevitable backlashes that occur in the gear of a watch mechanism. 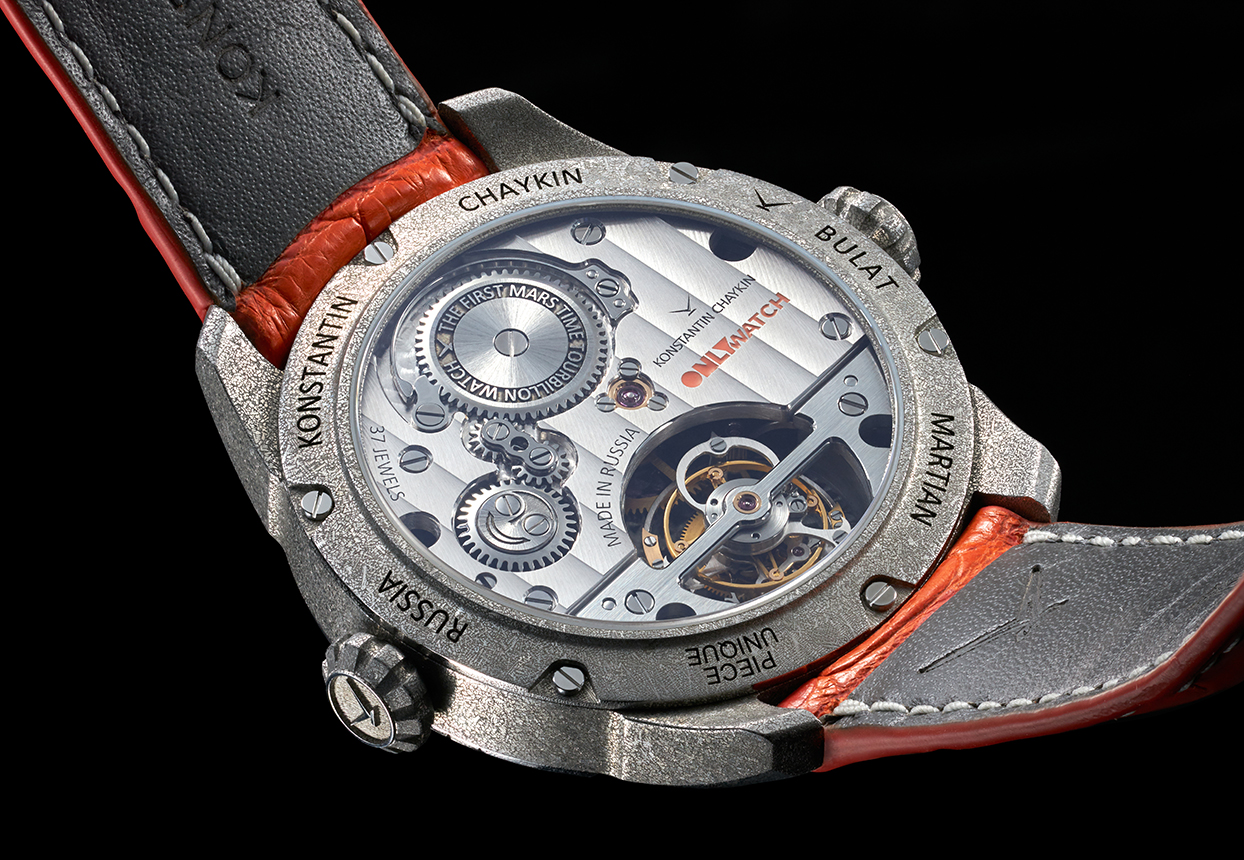 The counting of Martian time in hours and minutes is accompanied by Konstantin Chaykin’s combined ‘am/pm’ and ‘day/night’ Martian time indicator invention. The idea to create such an indicator, implemented in the form of a 24-hour wheel installed under the hour-hand dial, came to him while thinking about the inconvenience of having two types of indicators for the periods of the day – am/pm (‘am’ being from 24:00 to 12:00, ‘pm’ from 12:00 to 24:00) and ‘day/night’ (‘day’ being from 06:00 to 18:00 and ‘night’ from 18:00 to 06:00). Why not combine these two systems in one indication? This is precisely what the Russian master did. 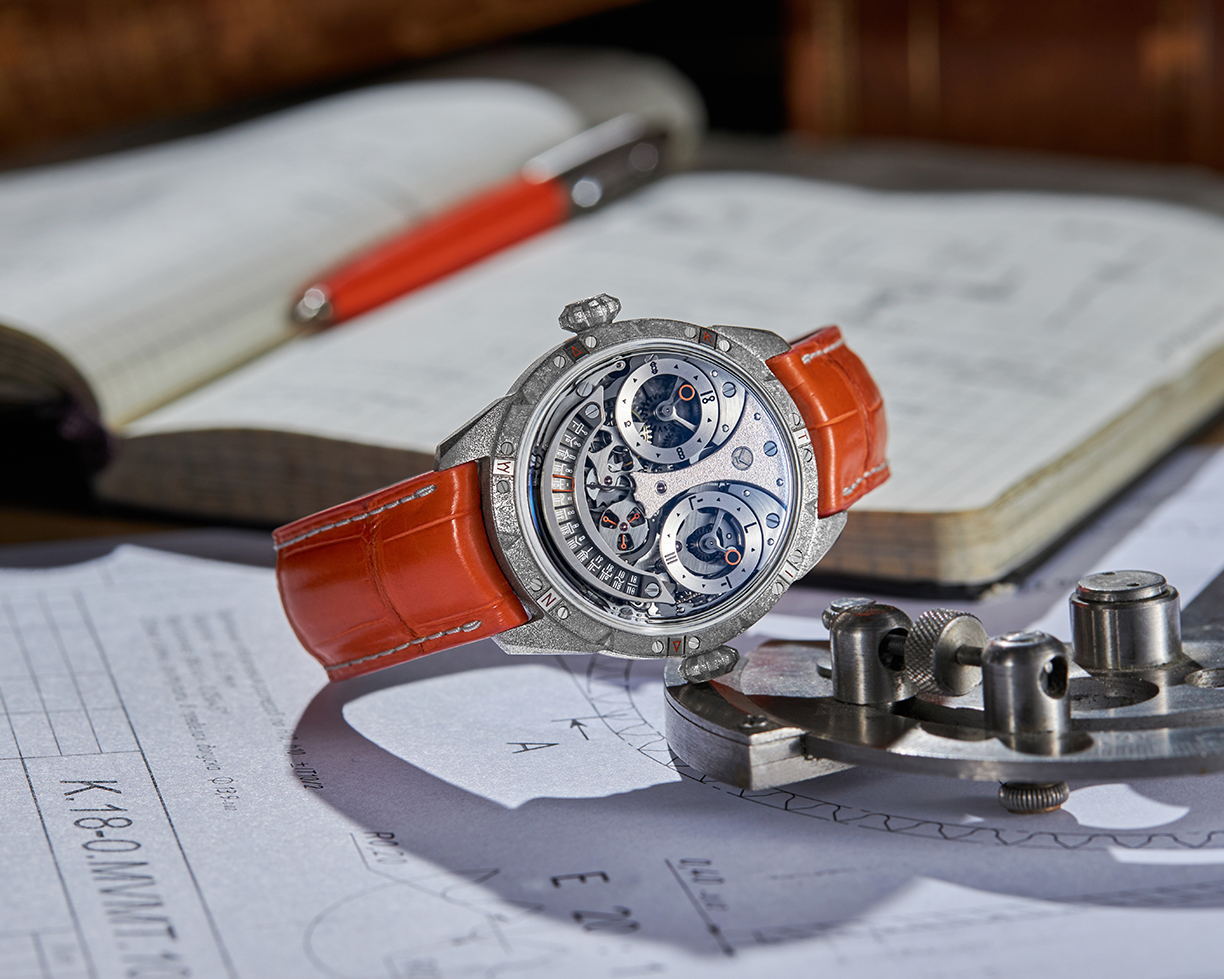 Besides the true stainless bulat steel, the Martian Tourbillon watch and the Joker Selfie, created for the previous Only Watch auction, share another common detail – a carefully hand-decorated and engraved crown wheel core in the form of the face-like dial of the Joker watch.

For this watch, Konstantin Chaykin created a unique skeletonized dial with Joker-indication – the JokerMartian face. The trademark smile of the Wristmons no longer tracks the phases of the Moon, instead indicating the date according to the Martian calendar, with months consisting of 28 sols. The date is marked using a hypothetical Martian system of calculation, which Konstantin Chaykin imagined for this watch. These same symbols are used for marking the scales of the Martian hours and minutes, with the hour and minute hands also made in the form of a Martian number ‘1’. You have to admit that old Breguet couldn’t have imagined that the only cosmic – Martian – version of his design would be created by a Russian watchmaker!

Konstantin Chaykin hid another detail in the Martian Tourbillon watch, which he also designed with Mars in mind. Try to find it! You can’t? Okay, it is placed on the reverse side of the movement – the rocking lever of the winding gear is in the shape of a Martian number ‘3’. Thanks to the Russian master, Martian watchmaking gets its first unique detail in the watch movement! 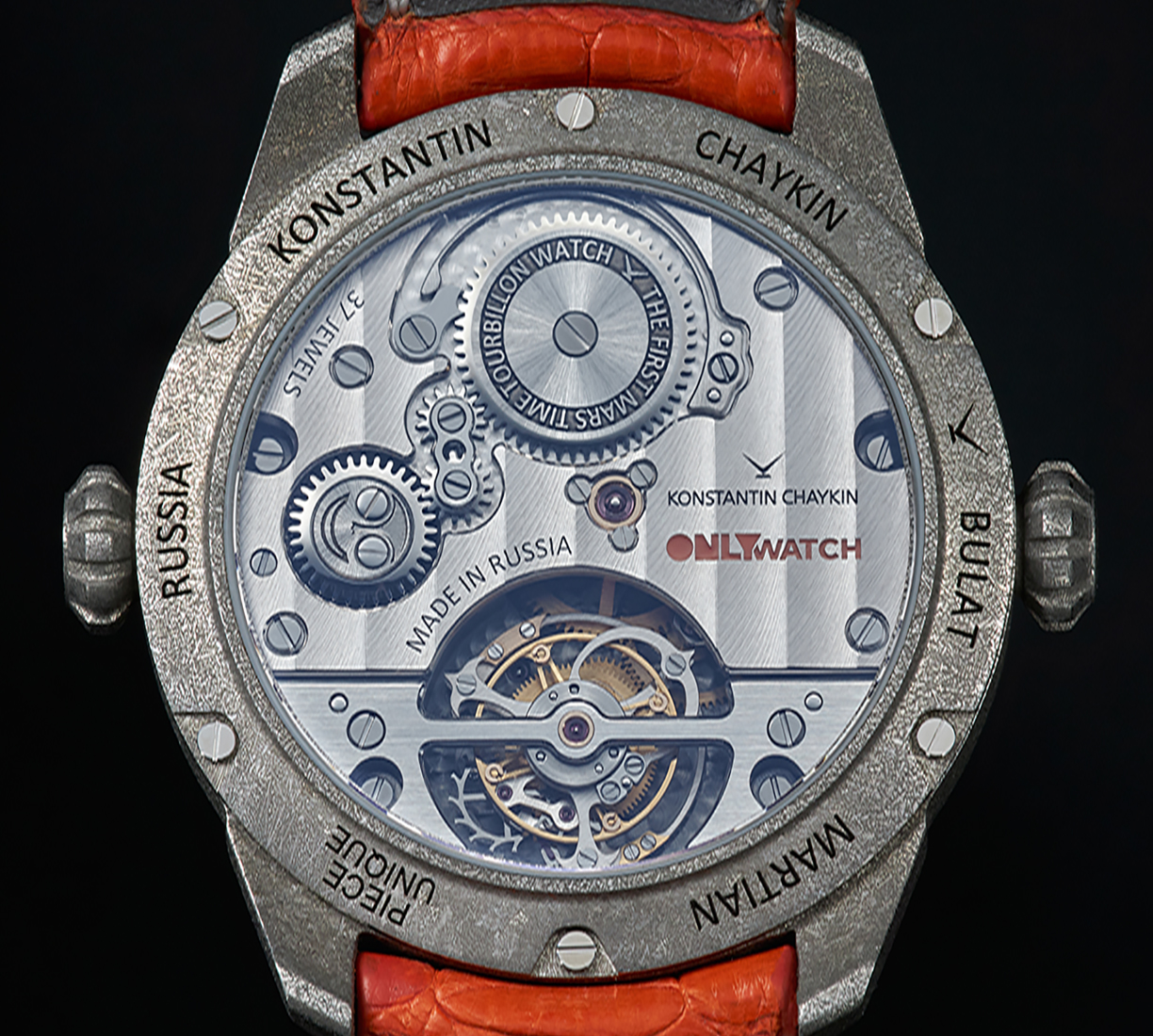 Are you planning a trip to Mars? Have you already booked a room in Elon Musk’s hotel? Don’t forget to take with you the first world’s first Martian tourbillon!