“Moscow Computus Clock” The most complicated clock in Russia

The name “Moscow Computus Clock” was not accidental. Konstantin Chaykin created a symbolic clock venerating the ancient golden-domed, white-walled capital. The choice of architectural inspiration was also deliberate. Not the red-bricked Bologna-inspired fortified walls of the official Kremlin, but the pearl of Russian architecture, the Cathedral of the Intercession of the Most Holy Theotokos on the Moat, known to the world as St. Basil’s Cathedral. The supercomplicated astronomical table clock “Moscow Computus Clock”, created by Konstantin Chaykin, is the most complex clock ever created in Russia. The incredibly complicated clock movement is made up of 2506 parts, which set in motion numerous indicators, requiring the placement of four dials. 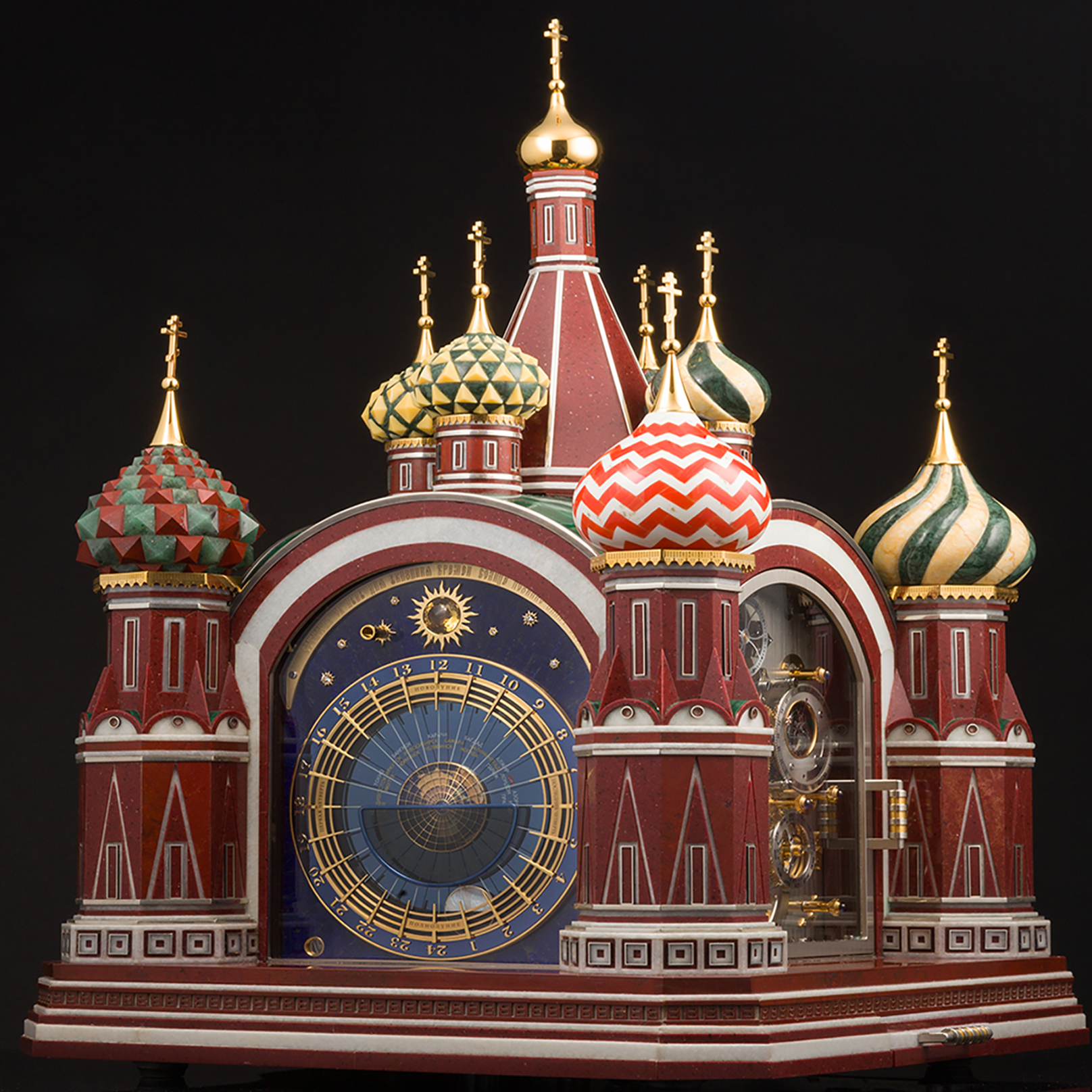 The fundamental complication of the “Moscow Computus Clock” is the Orthodox Easter date indicator, one of Konstantin Chaykin’s most complex inventions. As well as this indicator, a further 26 complications and functions are implemented in the clock – in the history of Russian clockmaking there is no other clock that is comparable in complexity to the “Moscow Computus Clock”. “The first fully mechanical and automatically operating computus module with Orthodox Easter date indicator with one hand I made in 2007. The ‘Moscow Computus Clock’ is the result of experience, improvements, and inventions accumulated over nine years, though it still took two years to create this clock. Nevertheless, can you imagine how much these two years of work cost the whole manufactory?” – Konstantin Chaykin 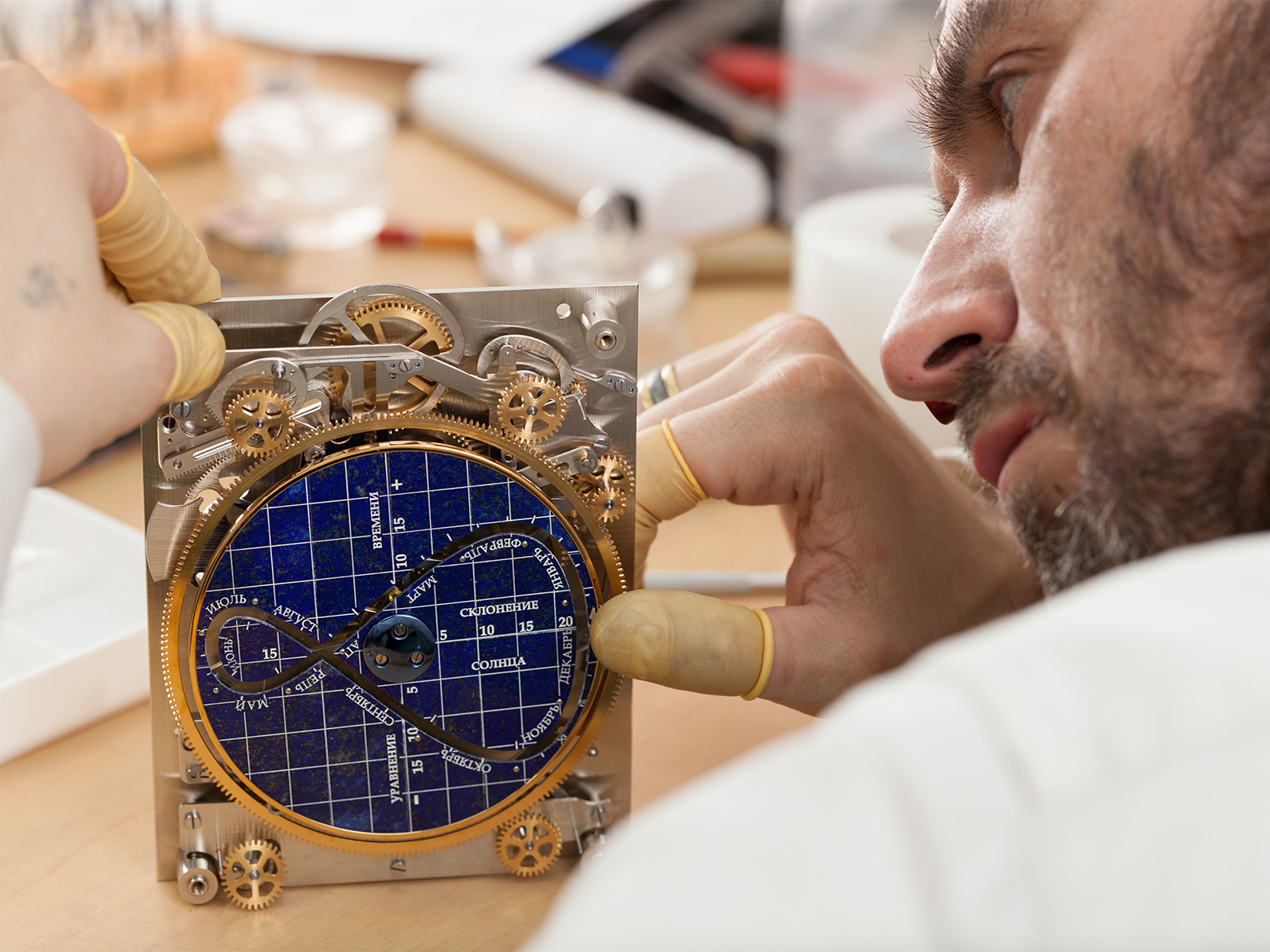 Some complications and functions of the “Moscow Computus Clock” are not obvious until they begin to operate. One such function is Konstantin Chaykin’s intelligent power reserve indicator, which activates during the last two days of the ten-day power reserve. This indicator is made in the form of a black-and-white disk, which rotates at a speed of about one revolution per second and is installed in a small aperture near the number ‘27’ on the date dial. When the remaining energy of the winding barrel is only enough for one day of the operation of the movement, an acoustic notification device activates, warning of the critically low level of power reserve by striking a gong once every two minutes. 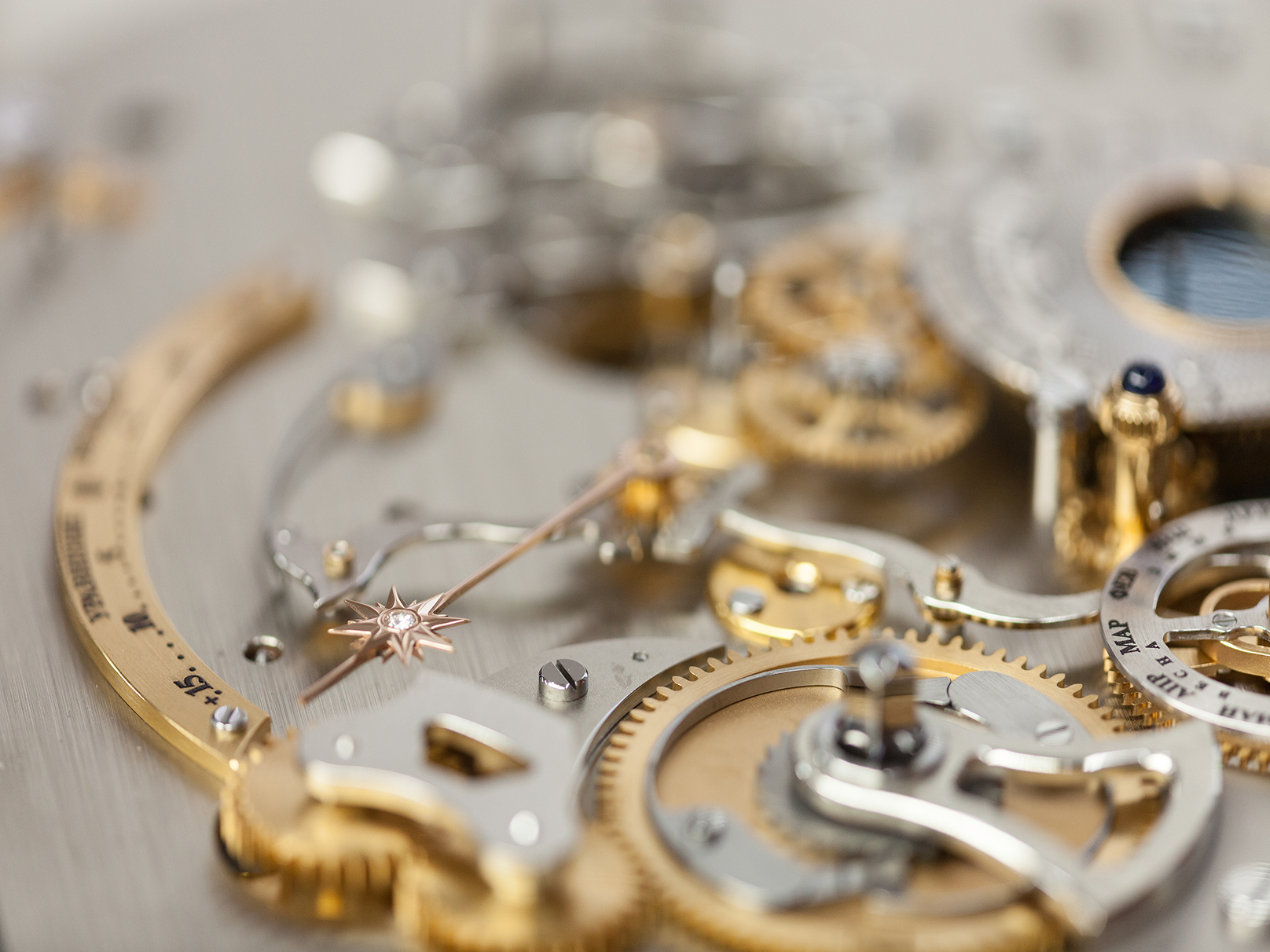 The clock movement of the supercomplicated astronomical “Moscow Computus Clock” is magnificent. The incredibly complex calibre TCO.03-1 is assembled from 2506 parts, setting in motion indicators located on four dials installed on four sides of the case. In total, implemented in the “Moscow Computus Clock” are 27 additional complications and functions (here, indicators for the hours, minutes and seconds of the average solar time are not included, as they are considered basic characteristics of the clock movement). In the history of Russian clockmaking, no other clock is comparable with the complexity of the “Moscow Computus Clock”. Having successfully assembled the supercomplicated movement of the “Moscow Computus Clock”, Konstantin Chaykin beat his own previous achievement, established just a year earlier with the completion of the supercomplicated “Northern Computus Clock”. The computus module is inactive throughout the year, waking up ten minutes before the arrival of the new year. This is followed by an incredible clockwork act, taking just a few of the 525,600 minutes that make up the year. The Easter hand leaves the date of the previous year’s Easter, moves far to the left, and then starts its slow climb to the Easter date of the new year. Mission complete. 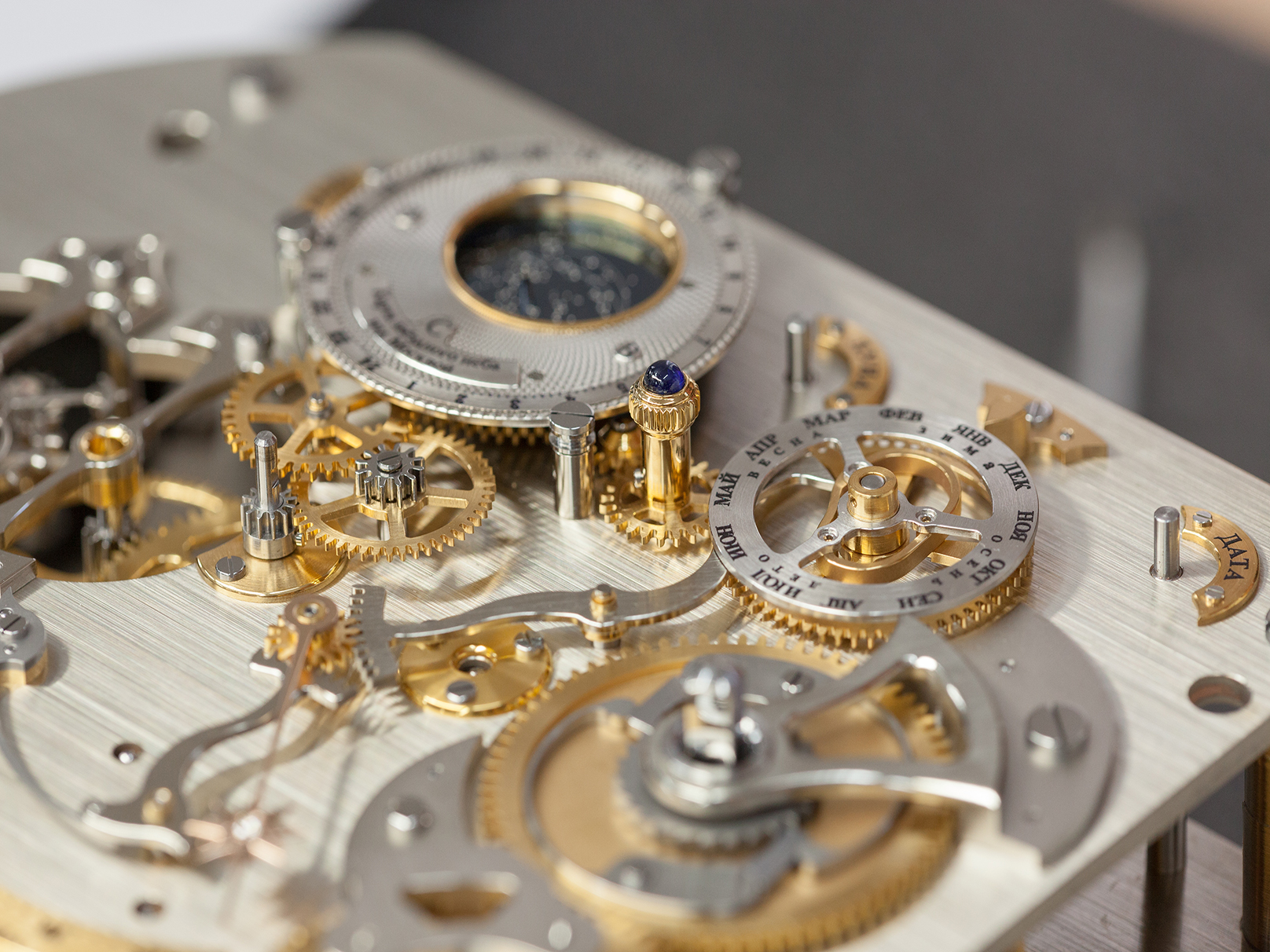 A special place among the many functions of the clock is occupied by the analemma indicator. “I had been considering the analemma module for nine years,” states Konstantin Chaykin. “The analemma itself resembles the symbol of infinity, and whatever I did, my thoughts constantly returned to the idea of realizing in a clock this most interesting astronomical phenomenon. For nine years I came up with different variations of such a module, and the last one, installed in the “Moscow Computus Clock”, is the finest in its construction." 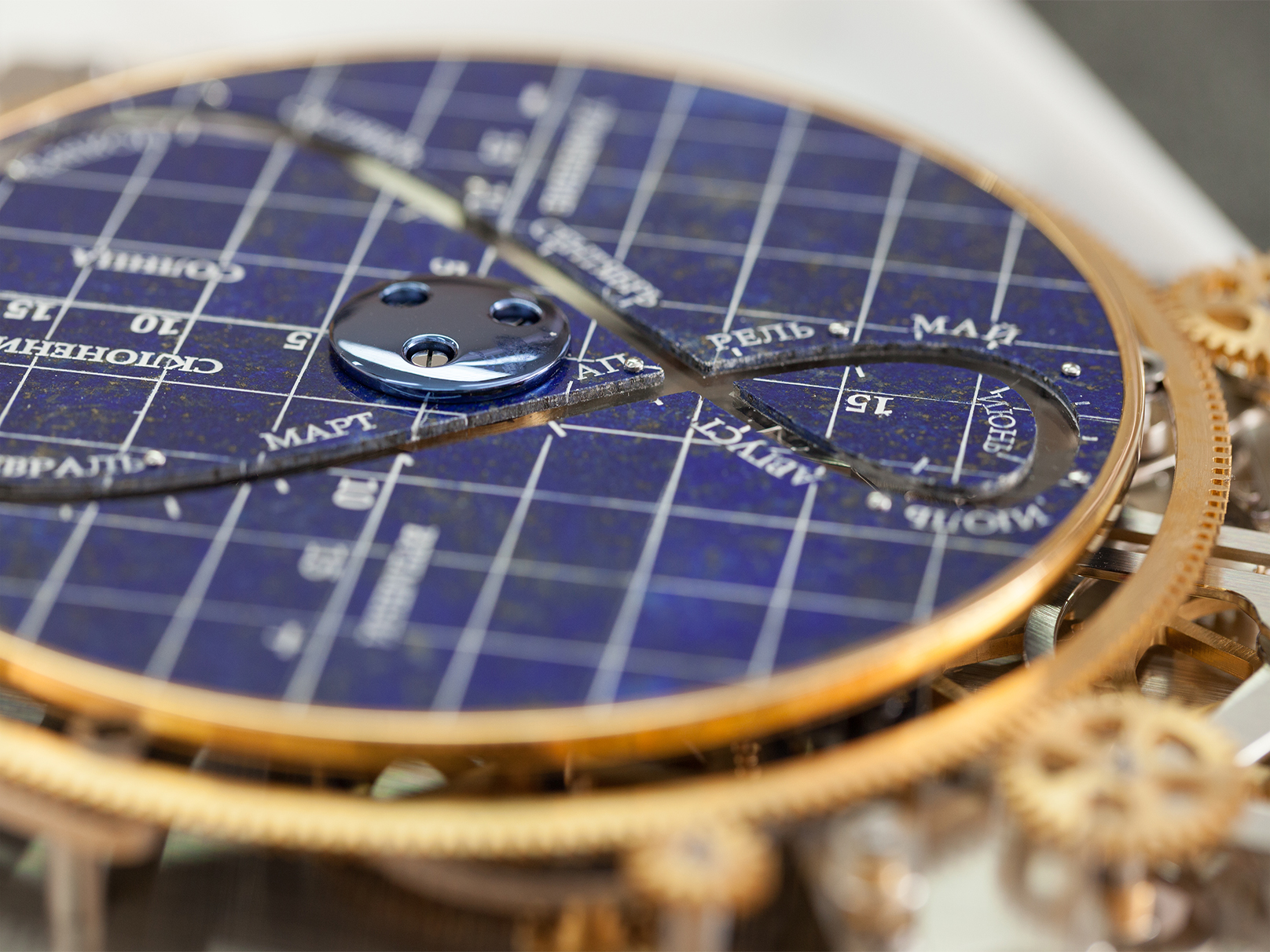 The dial of the analemma looks incredible, showing the position of the Sun in the sky throughout the year, if marked at the same time every day, such as noon. This complication cannot be called rare for one simple reason – it is unique. 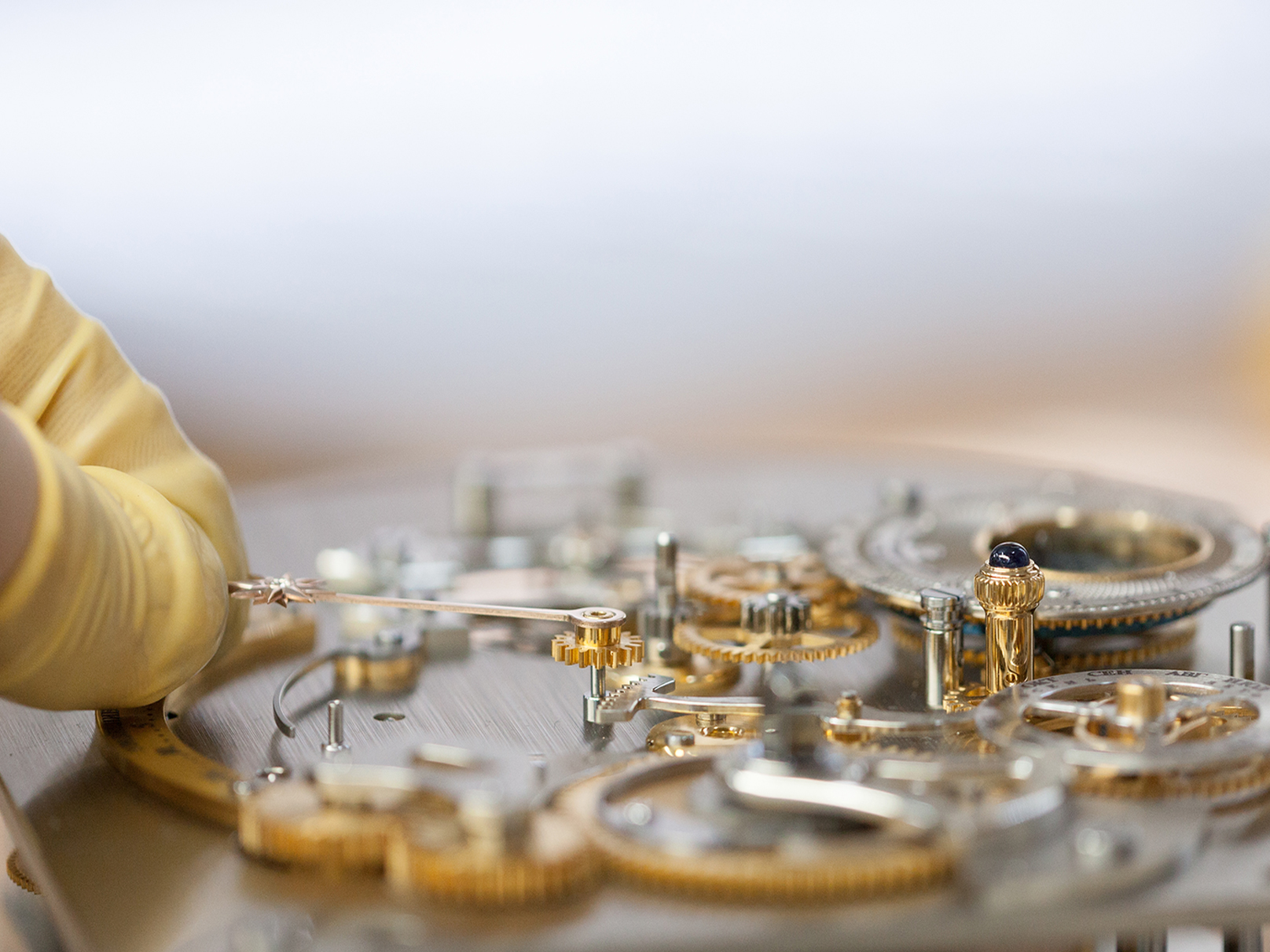 It was invented by Konstantin Chaykin and first used in the “Moscow Computus Clock”. 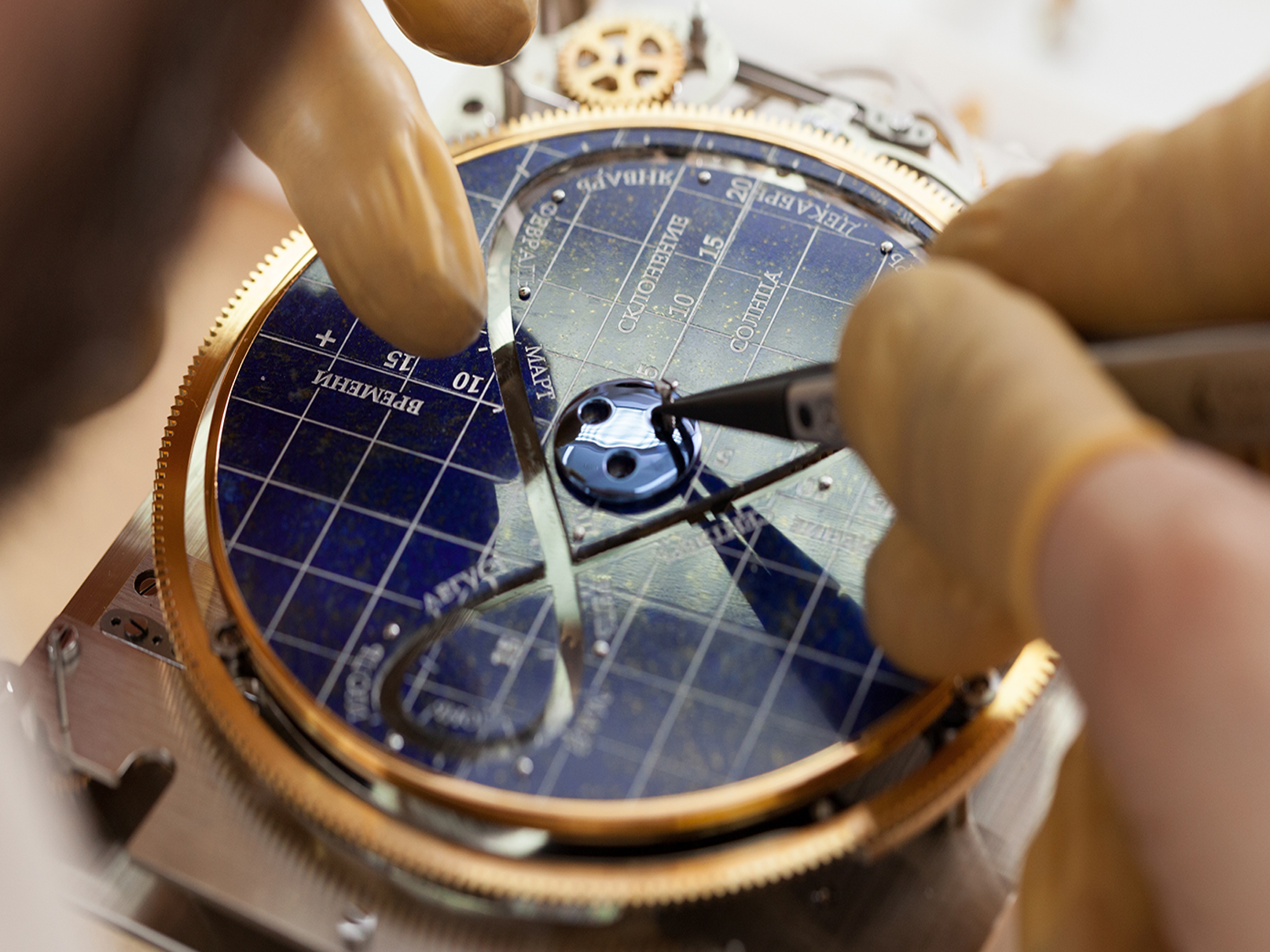 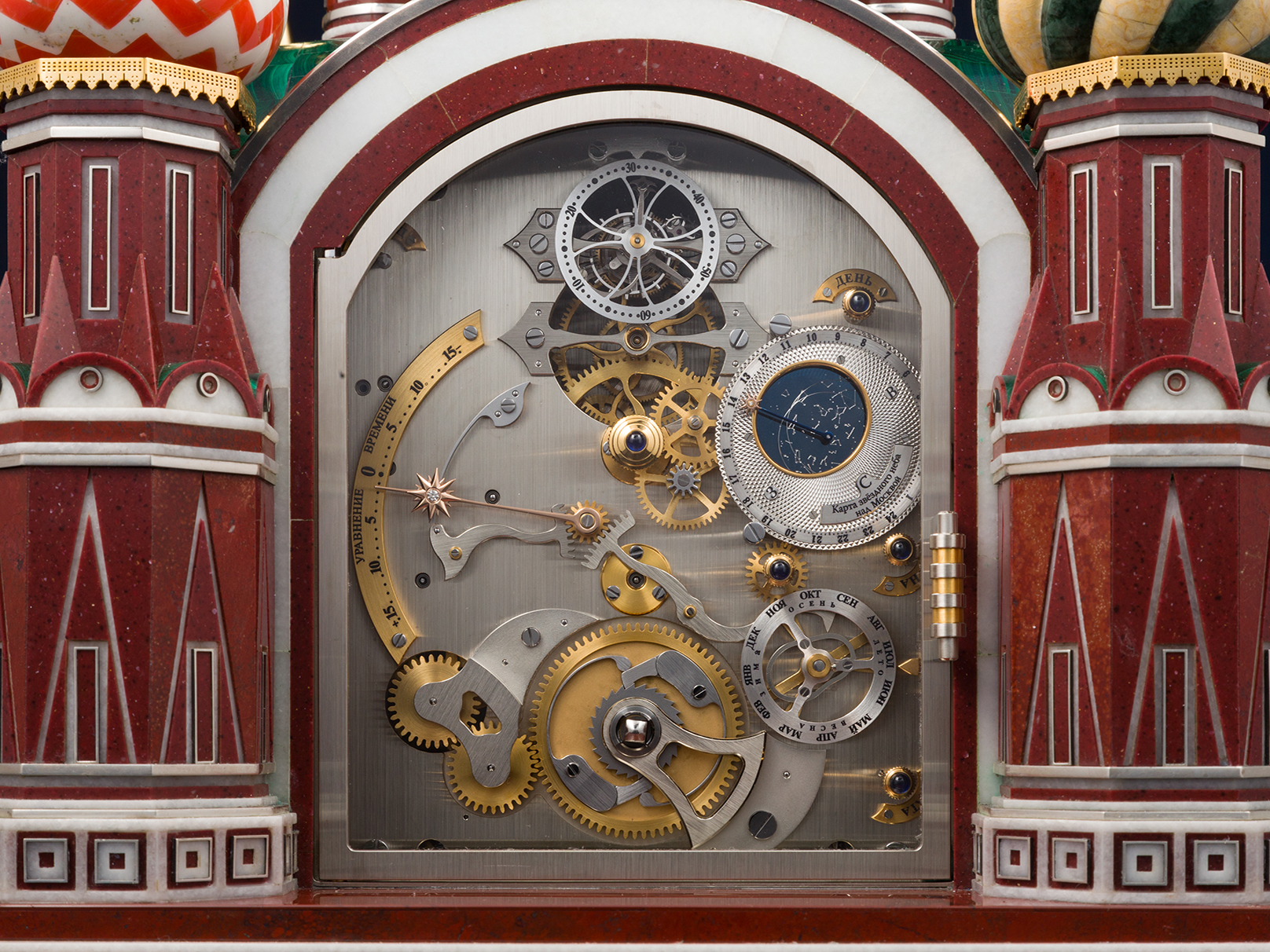 The case of the clock was extremely difficult to execute, with its assembly requiring more than 2500 parts, mainly consisting of decorative and semiprecious stones of different types carefully adjusted to each other. 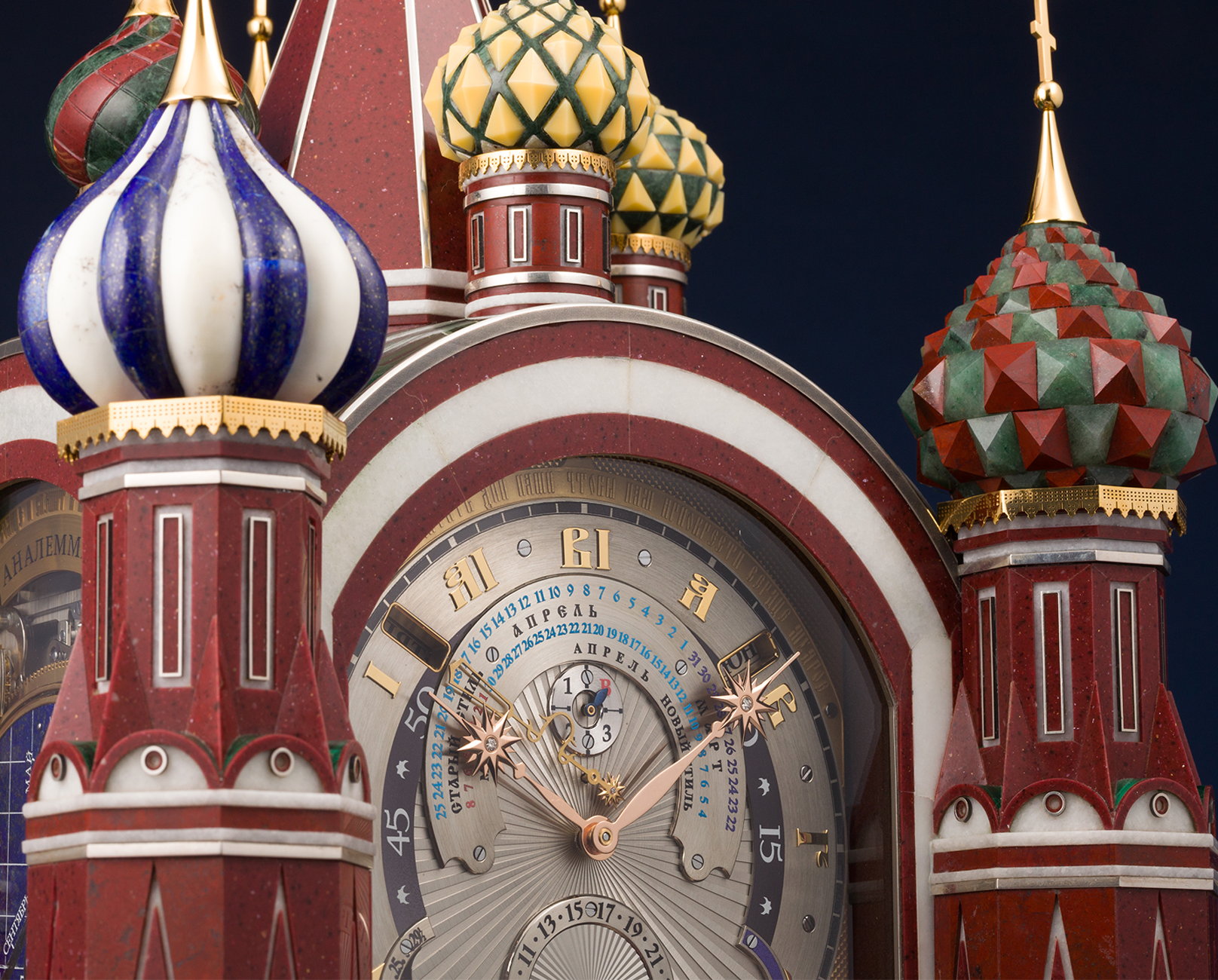 The complex technique of installing the stone parts required several stages of processing and fitting and every facet was to have pre-calculated sizes and be perfectly polished, therefore the result can only be called amazing. 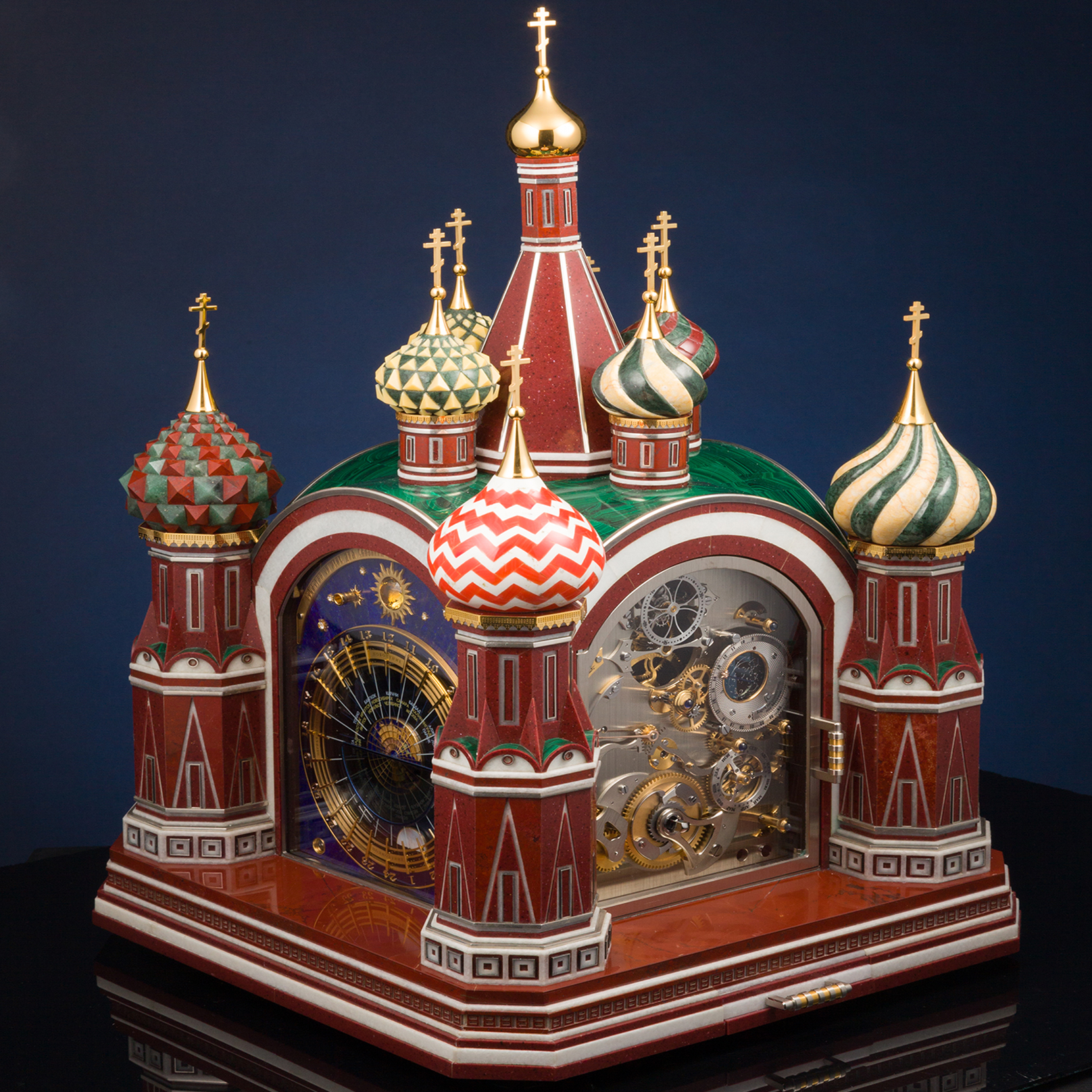 The calibre TCO.03-1 of the “Moscow Computus Clock” was developed by Konstantin Chaykin and equipped with a mechanical device indicating the date of Orthodox Easter, as well as 26 other additional devices, complications, and indicators. The movement was made entirely at the Konstantin Chaykin manufactory according to the standards of haute horlogerie. Components finished using classical techniques: fine longitudinal and circular grindings; manual chamfering, polishing; spherical polishing of the axle tips; and galvanized plating of nickel and gilding. A distinctive feature of the movement is the “alpha” carriage design, a signature feature of Konstantin Chaykin’s table tourbillons, as well as a special component for installing dials on four sides of the case.

The complications of the Moscow Computus Clock

(Hours, minutes, and seconds of the mean time are considered to be the basic functions of the movement and are not seen as complications.)